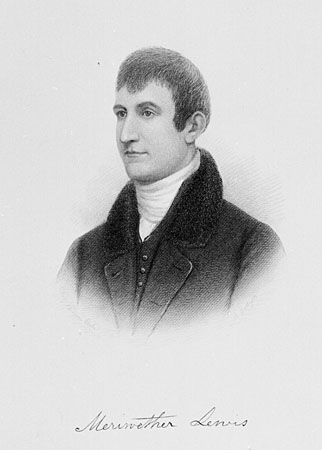 Meriwether Lewis was born in Albemarle County, Virginia, on August 18, 1774, the son of wealthy plantation owners William and Lucy Lewis. Meriwether never got to know his father, who died while in the service of the Revolutionary Army, but he remained quite close to his mother for the rest of his life.

He would get his chance in 1794, when he joined the militia during the so-called Whiskey Rebellion, a failed tax revolt led by frontier farmers upset over excise taxes on whiskey. The revolt was soon put down and shortly thereafter Lewis enlisted as a regular in the army.

In 1801, President Thomas Jefferson, a fellow Republican and Virginian, asked Lewis, by then a captain in the army, whether he would serve as his personal secretary. Lewis eagerly accepted, setting the stage for what would be his life's greatest achievement. Impressed with young Meriwether's abilities and innate intelligence, in 1803 Jefferson chose him to lead the nation's most important exploratory expedition to date.

From 1804 to 1806, Lewis and co-captain William Clark led almost three dozen men across half the continent, from St. Louis to the Pacific Ocean and back again. Lewis returned a hero and was appointed governor of the newly acquired Louisiana Territory. He found find little pleasure in administering this vast territory, though. Moreover, his mental health began to deteriorate. He died in Tennesee on October 11, 1809, while traveling to Washington, D.C., apparently the victim of his own hand.