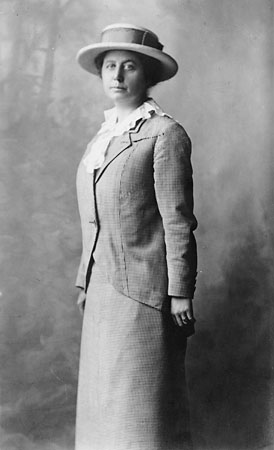 Dr. Marie Equi was an early Portland activist, described by the Oregonian as “a firebrand in the causes of suffrage, labor, and peace in Portland of the [19] ‘teens, ‘20s, and ‘30s.” She first appeared in the Portland papers after aiding women in a cannery strike in 1913. She was trampled upon by horse-mounted strikebreaking police and injured her back. Equi claimed that this treatment by the authorities shaped her decision to turn to anarchy. In 1916, during a war-preparedness rally for World War I, she urged Portland men not to enlist in the military and was arrested and convicted of sedition under the Espionage Act.

During her trial, the prosecuting U.S. Attorney submitted evidence of her lesbianism and fiery temper in an attempt to portray her as morally corrupt. Pardoned by President Wilson, she served one year, including ten months at San Quentin Prison in California. An abortion advocate, Equi spent time in jail with Margaret Sanger when the renowned birth control promoter visited Portland.

Born in New Bedford, Massachusetts in 1872, Equi moved with Bess Holcomb, a longtime friend and college classmate to The Dalles, Oregon. She graduated from the University of Oregon medical school in 1903. It is reported that she treated the health problems of Indians and cowboys in Central Oregon, traveling on horseback. A charitable woman, she was commended by the US Army for her humanitarian effort during the great San Francisco fire and earthquake of 1906.

Despite her notoriety, Equi died mostly forgotten on July 12, 1952, at the age of 80 in a Portland hospital.

In 1910, the census reported that there were 152 female doctors in Oregon. This photograph shows a female medical assistant helping a patient in the Portland office of Dr. Marie Equi. Equi, a medical doctor who worked in Oregon in the early 20th century, was also a labor activist, …

In 1912, Oregon women won the right to vote; for the first time, they could also serve as members of a jury. Dr. Marie Equi—to the far right wearing a white blouse and dark hat, looking over the shoulder of the only man in the photo—a well-known suffragist and …