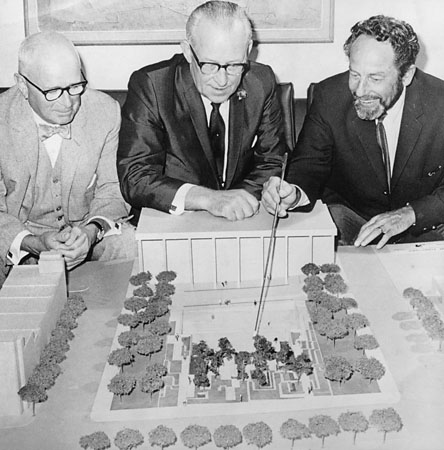 When the Portland Development Commission (PDC) began its work in 1958, its first chairman, Portland businessman Ira Keller, announced that he expected its decisions to be unanimous. Most people understood Keller to mean that the decisions would be his. Indeed, for the next fourteen years, Keller oversaw the commission and pushed ahead with controversial and sometimes successful—but often unpopular—urban renewal plans.

Keller was born in Portland, Maine, on February 2, 1899. After serving in World War I, he graduated from Rensselaer Polytechnic Institute in 1920. Over the next six years, Keller worked for Westinghouse Electric, Union Carbide, and National Acme Company. In 1926, he began working for Container Corporation of America in Chicago where he became executive vice-president in 1946. Keller retired in 1953 and moved with his wife Lauretta to Portland, Oregon.

His retirement was short-lived, however. In addition to serving as the chairman of the PDC, in 1954 he founded Western Kraft Corporation, a paper products company, and had a mill built in Albany. He was also active in civic affairs and sat on a number of boards and committees. In 1972, he established the Foundation of Oregon Research and Education and became the chairman of the Oregon Graduate Center for Study and Research. Keller was a trustee to the Oregon State University Foundation and a chairman emeritus of the University of Oregon Health Sciences Center advisory council. Keller was named Portland's First Citizen in 1972.

Keller's business successes and active involvement in community organizations enabled him to have a significant impact on Portland's civic life and urban geography in the 1950s, 1960s, and 1970s. However, Keller is best known for his fourteen-year tenure on the Portland Development Commission, 1958-1972.

As chairman of the Commission, tasked with revitalizing Portland's urban center, Keller pushed through a renewal plan for the South Auditorium area of downtown, building the Forecourt (later Ira Keller) Fountain there in 1970. Although many in Portland's business sector praised the actions of the PDC in replacing run-down commercial districts and infusing new life into Portland's older neighborhoods, many city residents criticized his actions. Former residents of renovated areas observed that Keller did not experience first-hand the effects of demolishing entire blocks of well-established single family homes occupied by ethnic minorities to make way for offices and apartment buildings. His critics also claimed that Keller wielded too much power in the city and did not tolerate dissent—for example, Keller did not welcome neighborhood input in commission plans that called for the razing of mostly immigrant housing the South Auditorium area.

Ira Keller died on April 29, 1978. A strong voice for Portland commercial interests, he was instrumental in revitalizing Portland's core business districts. The Ira Keller fountain and the Keller Auditorium were named in his honor after his death.