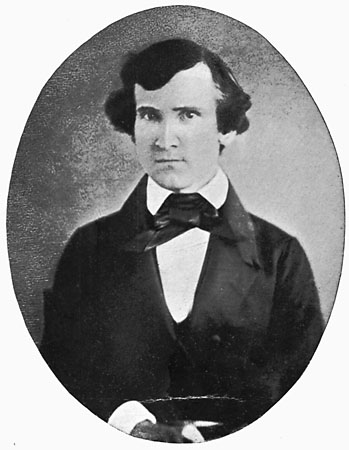 John Kirk Townsend's traveling companions in November, 1834, had a hankering for alcohol. They were so desperate for a drink that, while the naturalist was away, they downed alcohol he used to embalm reptiles, ruining months worth of work. It wasn't the first time Townsend lost to his companions' appetite. Earlier, Townsend had returned to his camp to find fellow naturalist Thomas Nuttall Nathaniel Wyeth eating an owl Townsend had intended to preserve as a scientific specimen. Despite Townsend's occasional difficulty preserving specimens, he described numerous new species on a western expedition from 1834 to 1837. He also published an account of his travels full of colorful details.

Townsend was born in Philadelphia in 1809. At 10 years of age, Townsend entered the Friends' Boarding School at Westtown. The school had a reputation for emphasizing science and Townsend early became interested in ornithology. While he was still in school he began collecting the birds of West Chester County in Pennsylvania. In 1833, he discovered a new species. He showed the bird to John Audubon and the latter named it for Townsend in 1834. In 1833, Townsend joined the Academy of Natural Sciences of Philadelphia and the American Philosophical Society.

In 1834, Philadelphia naturalist Thomas Nuttall invited Townsend to join Nathaniel Wyeth's expedition to Oregon as an ornithologist. The two left Philadelphia in March 1834, joining Wyeth's party in St. Louis. During the overland trip Townsend collected numerous new species. He also learned about life in an arid region. In May, 1834, buffalo hunters showed Townsend how to quench his thirst by drinking the blood of a slaughtered animal.

When Townsend arrived at Fort Vancouver in September, John McLoughlin invited him and Nuttall to stay at his home. From Fort Vancouver, Townsend explored the surrounding area: Sauvie Island, the Willamette River, Walla Walla, and the Blue Mountains. He depended on Native Americans to capture the most elusive specimens. In return he paid them and acted as a doctor with mixed success. During his interaction with various Indian groups, Townsend observed and later described their cultural practices. He also robbed Indian graves of skulls on numerous occasions. His relations with Hudson's Bay Company traders were more honorable. For six months in 1835 Townsend acted as Fort Vancouver's surgeon.

Townsend left Oregon in 1836 for Hawaii. From there he traveled back to Philadelphia via Cape Horn. After arriving in 1837, he sold ninety three birds to Audubon who described them in his Birds of America. Thinking that Audubon did not give him enough credit (Townsend supplied 74 of the 508 species Audubon discussed), Townsend made plans to publish his own catalogue of species, but the project did not come to fruition. Townsend did, however, publish his travel journals in 1839 and 1840. He was hired as curator of the collections of both the Academy of Natural Sciences and the National Institute for the Promotion of Science in Washington, D.C. At the end of his life, Townsend tried his hand at dentistry.

John Kirk Townsend died in 1851 from exposure to the arsenic in a bird preservation powder that he had developed.