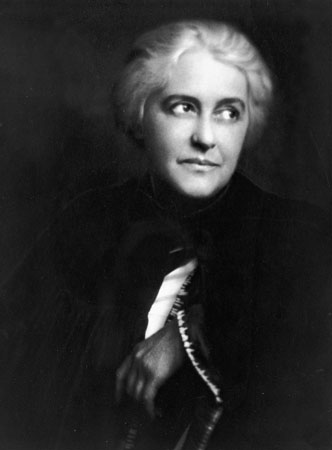 Aside from being a renowned award-winning poet, Sara Bard Field was perhaps best known for her prominent role in the women’s suffrage movement. A firm believer in the teachings of the Christian gospel, Field adopted the following excerpt from George Herron’s My Creed as her personal mission statement:

With this confession of faith, therefore, with Christ’s kingdom of Heaven as the only social goal I can see, I am yet ready to follow any man or to work with any program or to march in any camp that will take but the blindest single step towards making way for the organizing and evolutionizing power of the peace of good-will among men.

Field was born September 1, 1882, in Cincinnati. The daughter of orthodox Baptist and Quaker parents, Field moved to Detroit with her family where she was raised under the watchful eye of her father. At the age of 18, Field married Albert Ehrgott, a Baptist minister twice her age. Field joined her husband on his missionary work in India and Burma. In India, Field quickly came face-to-face with the realities of poverty and deprivation caused by drastically unequal distributions of wealth. The indifference of the wealthy classes and British colonists toward the suffering of the population further alarmed Field who had up until then led a very sheltered life. Through her missionary work, Field became aware of the “sense of inequality that exists in a world where the privileged had too much and the unprivileged far too little.” Field’s experience in India contrasted sharply with her stay in Burma where wealth was more equally distributed and the people, although not exceedingly well-off, led happier lives because they could still afford the daily necessities of life.

Complications with the birth of her son Albert caused Field to return to the United States for medical care. However, it was not until Field and her small family moved to Cleveland in 1903 that she became politically active. Motivated by her experience abroad, Field became interested in a “practical application of Christianity” that led her to open a kindergarten and soup kitchen through her husband’s parish. Through such activities, Field caught the attention of Major Tom L. Johnson who was a renowned labor activist. Field was further influenced by attending lectures by Tom Johnson and Eugene Debs as well as reading Henry George’s Progress and Poverty. In time she adopted socialism and became an advocate of Debs’s campaign for the United States presidency.

Her husband’s emerging Christian socialism found its way into his sermons and was scorned by the wealthier parishioners. The family, now including Field’s daughter Katherine born in 1906, was once again forced to relocate in 1910, this time to Portland, Oregon. While in Portland, Field became involved in the suffragist movement and was eventually chosen as the College Equal Suffrage League head organizer for the Oregon campaign. In the summers of 1911 and 1912 Field traveled Oregon and lectured on the necessity of women’s suffrage. The Oregon campaign was a success and in 1912 women received the right to vote in the state of Oregon.

As Field became more involved in the women’s suffrage movement, her relationship began to deteriorate with her husband. While in Portland, Field was introduced to the lawyer, poet, philosophical anarchist, and her future husband Charles Erskine Scott (C.E.S.) Wood. Her friendship with Wood eventually evolved beyond companionship and Field sought a divorce from Ehrgott, which she was granted in 1914. During this time Field also became involved in the woman’s suffrage movement in Nevada. She eventually became involved with the Congressional Union that was lobbying for what would eventually become the 19th amendment to the constitution, granting all women in the United States the right to vote. Field also delivered a petition to President Woodrow Wilson by driving cross-country, which at the time was a very hazardous journey. The 19th amendment was passed on August 26, 1920.

After the success of the suffragist movement, Field moved back to San Francisco with Wood. Eventually the two constructed a home that they nicknamed “The Cats” because of the large cat sculptures that were placed at the front entrance. Both Field and Wood wrote poetry. Field published two collections of poems including The Pale Women (1927) and Darkling Plain (1936) as well as a narrative poem titled Barrabas (1932) for which she was awarded the Book Club of California gold medal. During their time at “The Cats,” Field and Wood entertained artists, poets, musicians, and intellectuals in a salon type atmosphere. Well known for their progressivism, “The Cats” quickly became regarded as the vanguard of intellectualism in San Francisco.

After woman’s suffrage was passed, Field began to work on the early struggle for birth control rights and awareness. The movement was met with heavy opposition from conservative church organizations and threats of arrest from the police. Because Wood’s Catholic wife would not grant him a divorce, Field and Wood were not married until Jan. 20, 1936, after Wood’s wife’s death. Wood passed away eight years later and Field moved to Berkeley in 1955 to be near her daughter. Field died in 1974.