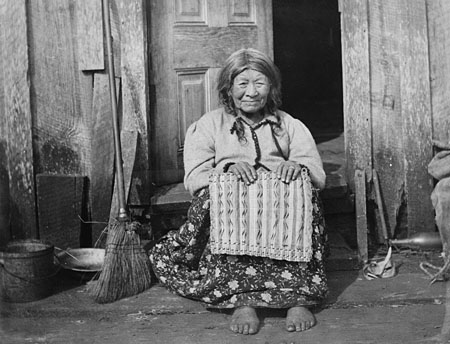 Pictured here is Tsin-is-tum, a Clatsop Indian woman known to whites as Jennie Michel. She claimed to be about 100 years old when this photo was taken in the early 1900s, though she was probably born sometime in the 1810s or early 1820s. Tsin-is-tum was a popular figure among tourists in Seaside around the turn of the century. She was known for her storytelling and her basketwork, an example of which is pictured here. A 1905 obituary noted that “it is doubtful if any person, man or woman in the State of Oregon has been photographed so frequently.”

Tsin-is-tum's life spanned a traumatic period in the history of the Clatsop people. When Lewis and Clark spent the winter of 1805-1806 on the Oregon coast, they estimated that the Clatsop numbered around 200. Their population had already been reduced by at least two smallpox epidemics, and would continue to decline throughout the nineteenth century as malaria, measles, syphilis, and a variety of other diseases swept through the Native communities of Oregon. When Tsin-is-tum died in March 1905, she was called the “last of the Clatsops.” Although the descendents of individual Clatsops survived, the Clatsop did not persist as a distinct and separate group into the twentieth century.

In an interview recorded by the Oregon Historical Society in 1900, Tsin-is-tum related a number of stories about her life. In addition to describing the Lewis and Clark Expedition's saltworks near present-day Seaside, she also told a story about the Hudson Bay Company's bombardment of her village, which likely referred to an incident that occurred in the spring of 1829. Tsin-is-tum noted that her father was killed and that her sister was blinded in the attack, which was launched because the chief factor of Fort Vancouver, John McLoughlin, mistakenly believed the Clatsop had killed a British ship's crew in order to plunder its cargo. Such attacks on Native villages were not uncommon during the fur trade era.