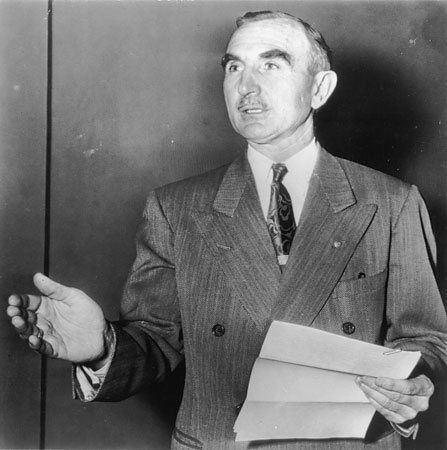 Nicknamed the “Conscience of the Senate,” Wayne Lyman Morse served 24 years as an independent, outspoken U.S. Senator representing Oregon. Born in 1900 in Wisconsin, Morse was raised in the tradition of Robert La Follette, a progressive Republican Senator from that state. Morse savored the passion of a political debate, earned a law degree, and became dean of University of Oregon's law school in 1930 at the age of 30.

Hoping to revive the progressive wing of the party, Morse won a Senate seat as a Republican in 1944. Morse promoted his vaguely defined ideology of “Constitutional Liberalism” to revive the liberal, reformist wing of the Republican Party that disappeared during its bitter, lonely years opposing Franklin Delano Roosevelt's New Deal. He supported an internationalist foreign policy as well as some parts of the New Deal. But moving the party away from its wealthy, corporatist roots earned him the animosity of many fellow Republicans. After Dwight Eisenhower aligned with the conservative camp in the 1952 election, Morse left the party to become an independent. Symbolically placing a folding chair in the aisle separating the parties in the Senate chamber, Morse was determined to vote his conscience without regard to party politics.

However, independence kept Morse out of powerful committees, and in 1956 he joined the Democratic Party. Re-elected in both 1956 and 1962, he joined a small but growing group of liberal senators questioned the prevailing wisdom of Cold War foreign policy. Morse criticized Cold War militarism and U.S. support for dictators, and was one of two Senators who voted against the Tonkin Gulf Resolution of 1964 authorizing military escalation in Vietnam.

A renowned political maverick, Morse strove to represent the interests of independent Oregonians marginalized by the parties. Losing his seat in 1968, Morse died in 1974 as he campaigned to win his seat back.