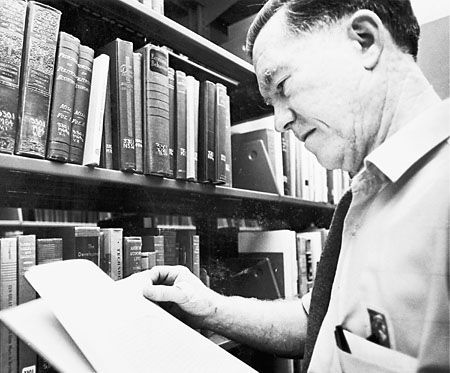 According to George Venn's 1999 review in the Oregon Historical Quarterly, William Stafford is the most widely read poet in the United States. Stafford was born in Hutchinson, Kansas in 1914, where his early encounters with nature ignited his creativity and passion for literature. A conscientious objector during World War II, Stafford was drafted and served in Civilian Public Service camps throughout the country from 1942 to 1946. He recounts this experience in Down in My Heart, published in 1947.

In 1944 Stafford married Dorothy Hope Frantz and in 1948 joined the faculty at Lewis and Clark College in Portland, Oregon. He pioneered unorthodox methods in the classroom, telling his students: “lower your standards and keep going. When it gets hard, don't stop - it is hard because you are doing something original.” With bachelor and masters degrees from the University of Kansas and a doctorate from the University of Iowa, Stafford stayed at Lewis and Clark until his retirement in 1980.

Between 1960 and 1993, Stafford authored 67 volumes of poetry and a number of essays, mostly drawn from ordinary life. His numerous awards include: the 1963 National Book Award for Traveling through the Dark, and the Shelley Award from the Poetry Society of America. Stafford was the Poetry Consultant to the Library of Congress from 1970 to 1971 and in 1975 Governor Tom McCall appointed him the Poet Laureate of Oregon. Following his retirement Stafford devoted most of his time to writing, preferring to work before dawn. Among his best-known collections are The Rescued Year (1966), Stories That Could Be True: New and Collected Poems (1977), Writing the Australian Crawl: Views on the Writer's Vocation (1978), and An Oregon Message (1987).