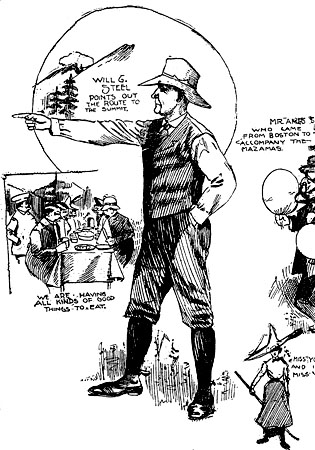 In 1870 William Steel read an article about Crater Lake in Central Oregon on a piece of newspaper in which his lunch was wrapped. The fifteen year old was fascinated. “In all my life I never read an article that took the intense hold on me that that one did.” Steel went on to promote the protection of Crater Lake as a national park, earning him the nickname “father of Crater Lake.”

Steel was born in 1854 in Ohio to abolitionist parents who operated a stop on the Underground Railroad. His family moved to Oregon in 1872. Steel worked in an ironworks for five years before becoming circulation manager for the Portland Evening Bee in 1878. Two years later he started his own paper, the Albany Herald. After four years, he sold the paper and landed a job as a letter carrier. In 1900 he married Lydia Hatch.

Although Steel was anxious to know more about the lake from his arrival in Oregon, he was not able to visit until 1885. After seeing Crater Lake, Steel began advocating for its protection. He wrote articles promoting Oregon's environment in West Shore magazine and published a book, The Mountains of Oregon, in 1890. Between 1906 and 1917 Steel also intermittently published his own magazine, Steel Points. In 1894, he co-founded the Mazamas, a hiking and mountaineering club for which the volcanic mountain cradling Crater Lake is named. The purpose of the Mazamas was to make Oregon's wilderness more accessible to average people. Believing that preservation of natural areas would come only as more people paid attention to them, Steel sought to connect Oregonians with the mountains. In 1887 and 1888, Steel set off Fourth of July fireworks displays on Mt. Hood, drawing Portlanders' attention to the illuminated mountain.

Steel's preservation efforts proved successful when Crater Lake was made a national park in 1902. He became a major presence at the park, serving as superintendent and later park commissioner until 1934.

William Steel died in Medford in 1934.