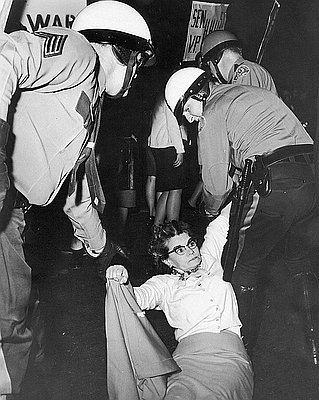 This September 27, 1966, photograph shows police officers struggling with Julia Ruuttila at a Vietnam War era protest against Vice President Hubert Humphrey outside the Sheraton Motor Inn in Portland. The photograph is from the Oregon Journal collection. Ruuttila (1907–1991) was a Portland journalist and a political activist for labor, social, and peace movements.

Portland police officers arrested thirty-one protestors at the demonstration. Inside the hotel, Humphrey addressed 1,000 supporters in a speech and asserted that the nation was right to pursue the war, which he said was painful, but necessary because the United States had a responsibility to oppose the “totalitarian” North Vietnamese government.

Protestors accused the police of pushing and hitting demonstrators. One protestor was hospitalized with a headcut and a police officer suffered from a broken finger. Protestors chanted “stop the bomb, stop the war, bring the troops home.”

This protest was one of many Portland activists staged to protest the Vietnam War, which lasted from 1962 to 1975.

Julia Ruuttila was a journalist, author, and political activist whose career spanned six decades. She was married four times and took her last name from her Finnish third husband, Oscar, whom she married in 1951. Ruuttila wrote stories, articles, and poems under her maiden name, Julia Godman, pen names Kathleen …