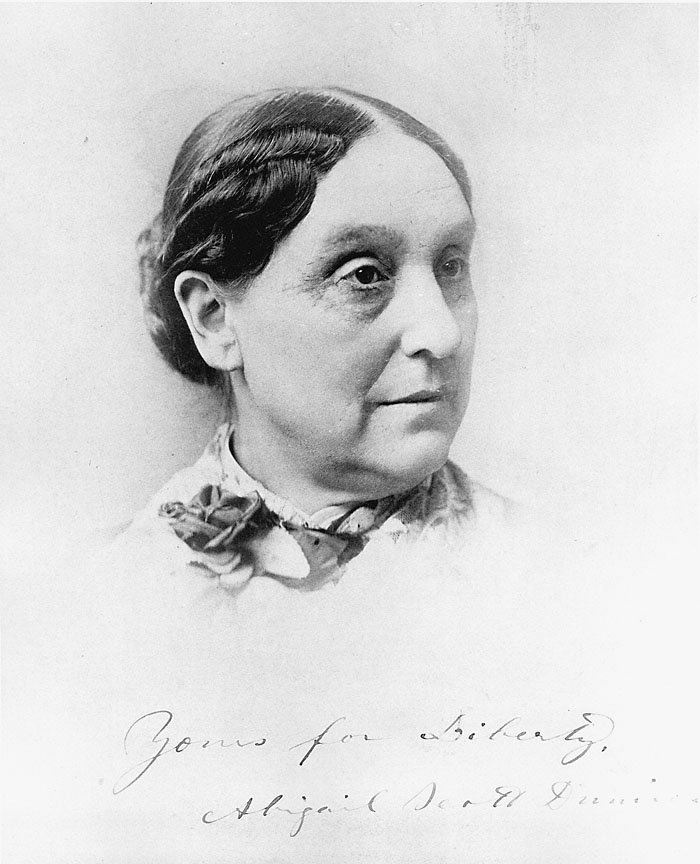 A writer, newspaper publisher, and promoter for women's rights, Abigail Scott Duniway was Oregon's strongest voice for the cause of woman's suffrage. Born Abigail Jane Scott in 1839, she left Illinois for Oregon with her family in 1852, where she met her husband Ben Duniway. The couple settled in Yamhill County, but because of financial difficulties and Ben's permanent injury in a wagon accident, they had to sell their land. The couple moved to nearby Lafayette, where Abigail taught school and, in 1859, authored Captain Gray's Company, or Crossing the Plains and Living in Oregon, the first commercially published novel in Oregon. In 1865, the family moved to Albany and Abigail opened a millinery shop where her exposure to the inequalities facing women motivated her to campaign for equal rights.

In 1871, the family moved to Portland and with the help of her numerous children she began publishing the New Northwest. The weekly newspaper, according to her 1985 biographer Dorothy Morrison, "supported women's rights without making them a bore." The paper was financially self-sustaining within a few years and was published until 1887. Her other writings include two novels, an autobiography titled Path Breaking, and a collection of poems, all of which highlight the plight of women in the West.

From 1870 to the late 1890s Duniway traveled throughout the Northwest promoting women's rights and campaigned with national suffragist Susan B. Anthony. As a result of her hard work and that of countless other suffragists, women "got the vote" in Idaho in 1896 and in Washington in 1910; however, Oregonians waited until 1912. The state's male electorate denied woman suffrage in 1883, 1900, 1908, and 1910. Abigail maintained that the close election in 1900 failed because her brother Harvey W. Scott, longtime editor of the Oregonian, opposed her efforts. This resulted in a bitter public feud between the two siblings. In 1912 the suffrage amendment passed and Governor Oswald West asked Duniway, who was then 78, to write the Equal Suffrage Proclamation.

Scott was born on a farm near Groveland, Illinois. His sister was Oregon’s famous suffragette Abigail Scott Duniway. In 1852, as a teenager, Scott traveled the Oregon Trail and settled in the Willamette …