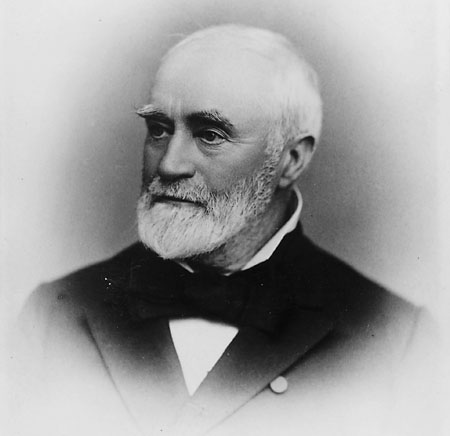 During the 1850s, the editor of Salem’s the Oregon Statesman Asahel Bush’s vitriolic editorials earned him the derisive nickname “Bushy Bush” and the enmity of rival editor Thomas Jefferson Dryer of Portland’s the Oregonian. The two tossed insults back and forth in the columns of their papers during the decade. In 1854, for example, Bush wrote:

A bar in a pulpit would not be more inappropriate than Dryer in a temperance meeting. He has been publicly and disgracefully inebriated on several occasions, and privately so many times too numerous to mention.

Perhaps because of his strong voice and forceful opinions, Bush was a leading Oregon journalist, politician, and banker.

Born in 1824 in Massachusetts, Bush apprenticed as a printer in Saratoga Springs, New York, at age 17. From there he moved back to Massachusetts and studied law. In 1850 Bush came to Oregon by boat after crossing the Isthmus of Panama by train and donkey. After arriving in Portland, Bush decided to move to Oregon City, then the largest city in the territory.

At Oregon City Bush established the Oregon Statesman in 1851, after his printing press arrived from the East. He moved the paper to Salem when it became the territorial capital in 1853. As editor of the Statesman he gave voice to the Democratic Party. Bush was visibly racist and defended slavery, but he also condemned Southern secession and supported the Union during the Civil War. Bush was active in politics as a member of an influential group of Salem Democrats which favored the location of the territorial capital in Salem and favored the prohibition of slavery in Oregon. He was the official territorial printer, a member (and one time chair) of the Democratic state central committee, and delegate to the 1892 Democratic National Convention. Bush was also a regent of the University of Oregon and a trustee of Willamette University. He married Eugenia Zieber in 1854. The two had four children before Eugenia died of tuberculosis in 1863. Asahel did not remarry.

After selling the Statesman in 1861, Bush co-founded the Ladd and Bush Bank with William S. Ladd in 1867. In 1877 he bought his partner’s share and became sole owner of the bank. He died in 1913. An editor, politician, and banker, Bush was one of Oregon’s most prominent early citizens. His house in Salem is now a museum.