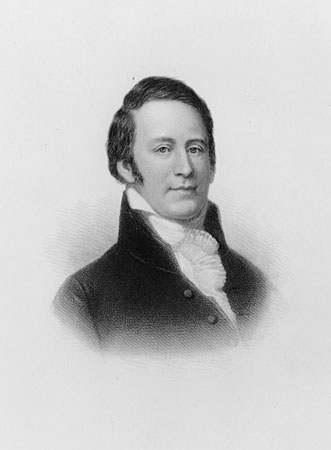 This undated, unsigned engraved portrait of William Clark is based on Charles Willson Peale’s 1810 oil painting of the famed explorer. Although wearing similar clothes and in a similar pose, Clark is depicted as a few years younger here than he is in Peale’s well-known portrait.

William Clark was born on August 1, 1770, near Charlottesville, Virginia, the sixth son of plantation owners John and Ann Rogers Clark. After the Revolutionary War, the Clark family moved to Kentucky, which at the time was on the western edge of Euro-American settlement. William Clark spent his teenage years on the frontier, learning outdoor skills from his famous brother, Revolutionary War hero George Rogers Clark, and other frontiersmen. At age 19 he joined the Kentucky militia to fight against the Indians of the Ohio Valley, then trying to prevent whites from settling their lands.

In 1792, Clark transferred to the regular army, where he furthered his frontier education and obtained valuable command experience. Three years later he met a young officer by the name of Meriwether Lewis. The two Virginian Republicans struck up a lasting friendship.

In 1803, while living in Indiana, Clark received a letter from his old friend Lewis, by then a captain in the army. In this historic document, Lewis invited Clark to help him lead an exploratory expedition across the continent. Clark eagerly accepted the offer.

Although Clark, who had resigned his commission in 1796, was technically only reinstated at the rank of lieutenant, both he and Lewis shared leadership of the Corps of Discovery. Clark was also the Expedition’s cartographer, producing dozens of maps of previously uncharted areas.

Upon the return of the Expedition to the United States, President Thomas Jefferson appointed Clark brigadier general of the militia and superintendent of Indian affairs for Louisiana Territory. Clark spent his later years serving in various political offices—including governor of Missouri Territory—and speculating in fur trade enterprises. He died of natural causes on September 1, 1838, and was interred on his nephew’s farm outside of St. Louis.