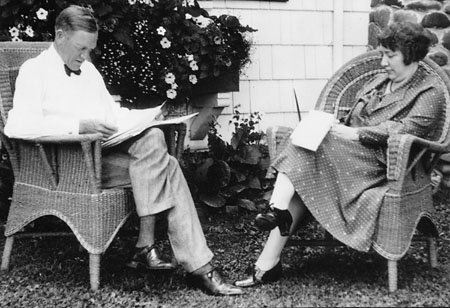 Charles Linza McNary was not considered much of a campaigner. He gave one or two speeches when he ran for office, preferring to spend the campaign season on his Salem area farm. Despite this understated approach to campaigning, McNary won re-election to the United States Senate five times and became one of the country's leading political figures.

McNary was born on a farm just north of Salem in 1874. By age nine, both of his parents had died, leaving his twenty-six year old college educated sister, Nina, to raise him. After working on the farm for his first 19 years, McNary entered Stanford University. Stanford was expensive, however, so he returned north to attend Willamette University in 1897 and graduated in 1898 with a law degree. McNary was admitted to the Oregon bar the same year. He entered politics six years later when his brother was elected district attorney of Marion County and gave him a position as deputy district attorney. He served as dean of Willamette University's law school from 1908 to 1913, while still serving as district attorney. Soon after Oswald West took office as Governor in 1911, he appointed McNary special counsel to the State Railroad Commission. In 1913 West appointed him to a vacant seat on the Oregon Supreme Court. In his 1914 re-election campaign, McNary lost his seat to Henry Benson by one vote, 34, 608 to 34,609. McNary went on to become chairman of the Republican State Central Committee in 1916.

Senator Charles McNary Accepts Vice-Presidential Nomination, 1940. When Senator Harry Lane (who had previously served as mayor of Portland) died in office in 1917, Governor James Withycombe appointed McNary to the United States Senate. Over the next 26 years, McNary supported farm relief, forest conservation, and public hydropower projects along the Columbia River. Franklin Roosevelt befriended McNary in 1936 and, as Senate minority leader from 1933 to 1944, McNary supported most New Deal programs. When Roosevelt attempted to pack the Supreme Court in 1937, McNary prevented the debate over the proposal from becoming partisan and ultimately contributed to its defeat. In 1940 McNary ran for vice president on Wendell Willkie's unsuccessful ticket. Extremely popular among his colleagues, McNary was reelected minority leader in 1944, even as he convalesced in Florida after a brain tumor operation.

McNary died in Florida in 1944. The McNary Dam near Umatilla is named for him. He is, perhaps, best remembered for his support of agriculture and co-sponsorship of the McNary-Haugen bill, attempting to stabilize farm prices, a version of which President Herbert Hoover signed in 1929.