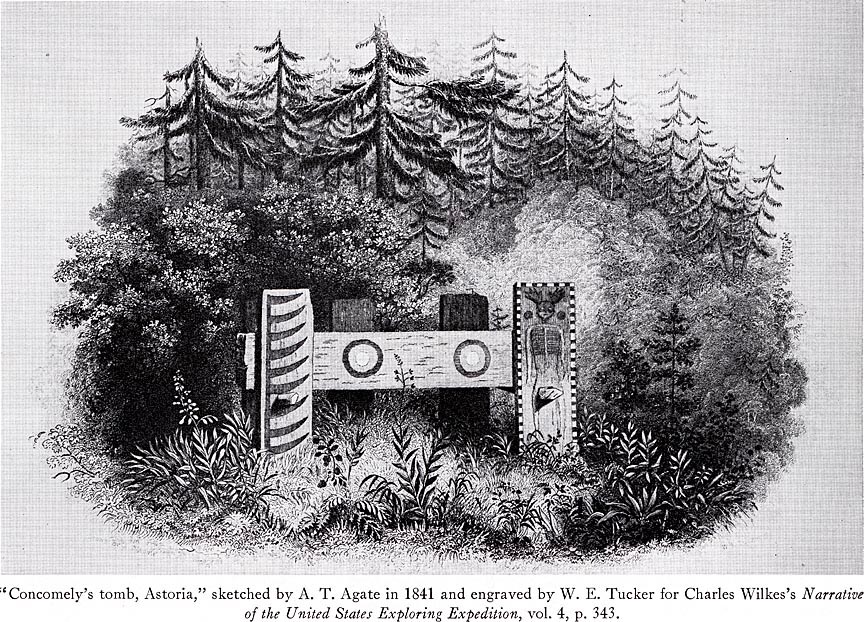 Comcomly was a Chinookan headman who traded with and befriended Anglo explorers who frequented his homeland, what is now Baker’s Bay at the mouth of the Columbia River. Though he had only one eye, Comcomly was an expert navigator, particularly knowledgeable about the treacherous waters of the Columbia. A skilled negotiator, he traded beaver pelts and salmon in exchange for Western merchandise. Comcomly first appears in the historic record in the journal of Captain Charles Bishop of the British ship Ruby which wintered in Baker’s Bay from December 1795 to January 1796. There is also some record of him in the Lewis and Clark journal during the time the expedition wintered at Fort Clatsop between 1805 and 1806.

In 1811, the Pacific Fur Company established a trading post at Fort Astoria. Comcomly immediately offered his friendship and expertise. He became one of its principal suppliers of beaver pelts and salmon. In order to solidify his trade with the Astorians, Comcomly apparently fabricated stories of attacks on fur traders by other tribes. Several of Comcomly’s daughters married fur traders, further elevating esteem among them.

In 1813, the Astorians surrendered their fort to the British of the North West Company as part of the War of 1812. Though he was disappointed that the Astorians abandoned their settlement, Comcomly established relations with the North West Company. After 1821, when the North West Company was absorbed by the Hudson’s Bay Company headquartered at Fort Vancouver, he worked as a navigator on the Columbia River. Often seen dining with John McLoughlin, Comcomly continued his work with the Hudson's Bay Company until his death in 1829 or 1830. He died of a disease that decimated the Chinooks, probably brought by the fur traders.