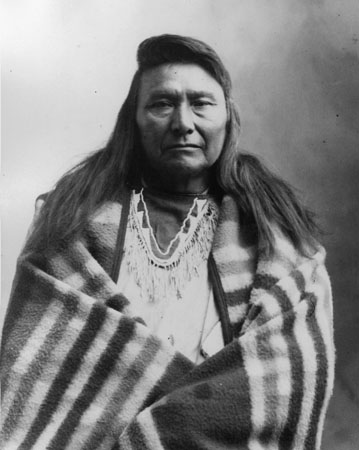 Chief Joseph was the leader of one band of the Nez Perce people (Nimi'ipuu). The Nez Perce resided in the plateaus, mountains and gorges of northeastern Oregon, southeastern Washington, and western Idaho. The legend of Chief Joseph and his famous retreat has long symbolized the loss of native peoples' lives and cultures in the late nineteenth century American West.

Chief Joseph was born in 1840 and baptized at the Lapwai Mission in Idaho where he was given his Christian name. His native name Hin-mah-too-yah-lat-kekt translates into English as “Thunder Rolling Down the Mountain.” His father had helped establish a large Nez Perce reservation by treaty in 1855. However, a gold rush in 1863 caused the U.S. government to reduce the reservation to a small area in Idaho.

With the influx of miners, the government ordered the Nez Perce bands led by Chief Joseph, Chief Looking Glass, and Chief White Bird to relocate to the new reservation. Initially refusing to leave the Wallowa Valley, the three leaders agreed to the resettlement plan only when violent conflict became imminent in 1877. Before the move, warriors from White Bird's band attacked and killed several white settlers. The U.S. Army retaliated against all Nez Perce, including those who were not part of White Bird's party.

To avoid defeat by the U.S. Army, in 1877 Chief Joseph helped lead 600 Nez Perce toward the Canadian border in a famed 1,400 mile, four-month tactical retreat. They defeated the Army in several battles throughout the summer. In late fall, Joseph and his band were encircled 40 miles from Canada. Exhausted and near starvation, Joseph told his people: “I am tired. My heart is sick and sad. From where the sun now stands I will fight no more forever.”

The Nez Perce surrendered and the government exiled the bands to Oklahoma. Although others, notably his brother Olikut, were the actual military leaders of the retreat, Chief Joseph's legend as “the Red Napoleon” enabled him to lobby high government officials to return his band to the Nez Perce reservation. Disease epidemics had killed many Nez Perce. In 1885, the Nez Perce reclaimed their remains and moved them to a northern Washington reservation.

Unsuccessful in his efforts to return to his homeland during his lifetime, Chief Joseph died in 1904 and was buried in the Colville Indian Cemetery on the Colville Reservation in Washington state.