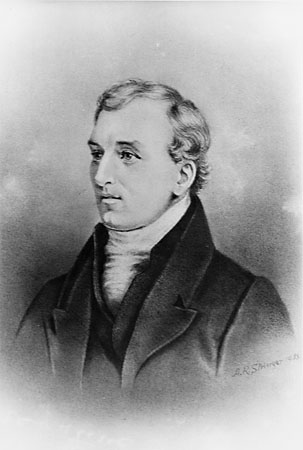 In early 1824, explorer and botanist David Douglas worked eighteen hours each day in preparation for his first trip from London to the Pacific Northwest. The work paid off. Over the course of Douglas’s eleven years as an exploring botanist, he described 250 plants previously unknown in Europe. The first botanist to systematically explore the Northwest, he also sent numerous specimens back to England, contributing to domestic gardens.

Born in Scotland in 1799, Douglas showed an interest in the natural world from an early age. After he left school at the age of ten, Douglas’s father, recognizing the boy’s penchant for plants, apprenticed Douglas to the head gardener of nearby Scone Palace. After his apprenticeship ended, Douglas enrolled himself in school to study math and science. After working two years in a private garden, Douglas got a job with the Botanical Gardens in Glasgow in 1820.

After extensive preparation, Douglas left for the Northwest in July 1824 aboard a Hudson’s Bay Company ship. Arriving the next year at newly constructed Fort Vancouver, Douglas began exploring the region. Initially he traveled with parties of trappers, but as he grew more confident he traveled only with an Indian guide. Over the next two years, Douglas covered nearly 4,000 miles. He returned to England in 1827. Three years later he explored in California, and then traveled to the Sandwich (Hawaiian) Islands. In 1833, he returned to Fort Vancouver. The following year he traveled again to the Sandwich Islands.

Douglas died in 1834 when he fell into a wild cattle trap and was gored to death while in the Sandwich (Hawaiian) Islands. Oregon’s state tree, the Douglas fir, is named for Douglas, although it was first described by Archibald Menzies, not Douglas. A peak in the Rocky Mountains, as well as numerous plants, are also named for Douglas.

From David Douglas to William Hooker

This document is an excerpt from a letter written by botanist David Douglas in October 1830. It was published in the Companion to the Botanical Magazine in 1836 and republished in the Oregon Historical Quarterly in March 1905.

Douglas, who had come to the Oregon Country to study natural history, …