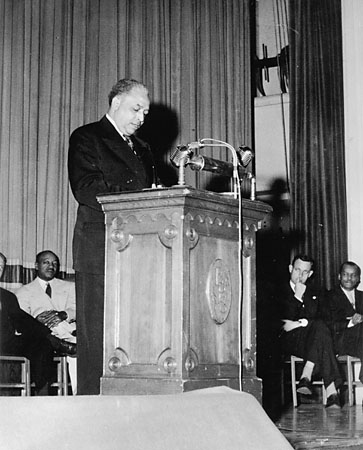 Dr. DeNorval Unthank was a dedicated doctor and civil rights activist who broke racial barriers in Oregon between 1930 and 1977. His professional and civic achievements made him a target of both social and institutional racism. He was often barred from local hospitals and excluded from medical societies—barriers he spent 40 years overcoming. "A Negro may have a few more doors closed to him and he may find them a little harder to open, but he can open them. He must keep trying.”

Unthank was born on December 14, 1899, in Allentown, Pennsylvania. His mother died when he was nine, leaving eight children. Unthank's father, a cook unable to support him, sent him to live with his aunt and uncle in Kansas City. After completing high school, Unthank attended the University of Michigan where he received his B.A. He received his medical degree in 1926 from Howard University in Washington, D.C. Unthank returned to Kansas City to complete advanced medical training before moving to Portland in 1929 to start his own practice.

When Unthank moved to Portland, he was confronted by a racist community determined to contain African American economic and social mobility. The Oregon State Constitution banned African Americans from living in Oregon until 1926 (a law not commonly enforced after the Civil War but still prohibitive to black immigration) and in the early 1920s both the governor and the speaker of the State House of Representatives were associated with the Ku Klux Klan. Against this backdrop, Unthank chose to move his family to the entirely white neighborhood of Westmoreland. Neighborhood representatives tried to convince Unthank to move elsewhere and even offered him money ($700-$1500) to move away from Westmoreland. Unthank refused and moved into the neighborhood. He and his family were the victims of broken windows, harassment, threatening phone calls, and general hostility. They had to move four times before they were able to settle down peacefully. Nevertheless, Unthank continued to build up his private practice and eventually retired in 1970. He then worked as a medical consultant for the state workmen's compensation board until 1976 just prior to his death.

Unthank's achievements are numerous. He won several awards for his work against racial discrimination as well as for his public service work. In 1958, the Oregon Medical Society named him Doctor of the Year. For his role in bringing down racial barriers, the city of Portland named DeNorval Unthank Park in North Portland in his honor in 1969. Unthank was the recipient of several citizenship awards including the distinguished citizenship award from the University of Oregon in 1971 and the citizenship award from Concordia College in 1975. Unthank was the first African American member of the Portland City Club. He was president of the local chapter of the National Association for the Advancement of Colored People (NAACP) and cofounder of the Portland Urban League. Unthank sat on Oregon's Committee for Equal Rights and the Council of Social Agencies.

Dr. Unthank died on September 20, 1977. His impact on racial integration and institutional recognition of minority groups was eulogized in many newspaper articles and obituaries by people from both the medical profession and the civic organizations he helped form and influence.