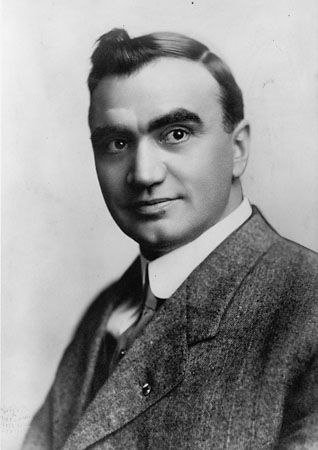 Born in The Dalles, Oregon, in 1868, Baker spent his formative years moving around the American west. He dropped out of school at the age of nine and worked odd jobs in the theater. In 1889, he moved to Portland and managed several live theaters until he purchased his own in 1901. He named it the Baker Theater and it became one of the city’s entertainment hot spots.

In 1898, Baker began a second career in politics as a Portland city councilman where he served intermittently until 1913. In 1917, he was elected mayor seven weeks after the United States' entry into World War I.

As mayor, Baker accomplished much and was lauded by newspapers as a true patriot. He supported the war effort by encouraging Portlanders to purchase bonds and held several festivals in honor of the local soldiers sent to Europe. He promoted the construction of the Burnside, Ross Island, and Sellwood bridges in the mid-1920s, widened streets, and improved the water and sewer systems. Baker personally felt his greatest mayoral success was the removal of subversives from Portland, such as the International Workers of the World.

Baker was a member of some 37 fraternal societies, such as the Masons and Elks, which aided his political ambitions. Though Baker was an extremely honest politician, several of these fraternal groups connected the mayor to the bigoted and temporarily powerful Ku Klux Klan. While he never actively colluded with them, the Klan supported his elections, and thus influenced his political agenda. In 1924, he ran in the primary for United States Senator as a Republican but was defeated by incumbent Charles McNary.

Affectionately known as “Our George” by the residents of the city he had led for so long, Baker died on May 16, 1941.

This photograph was published by the Portland Telegram on August 2, 1921, after local reporters were summoned to the Multnomah Hotel in Portland by an enticing phone message the day before. Upon arriving, the newspapermen entered a room full of some of the most influential men in the city, including …

In a typically theatrical public relations event, Portland’s gregarious mayor George L. Baker posed for photographs following a Native American “adoption” ceremony.  Baker was elected mayor in 1917 and served for the next sixteen years.  It is no surprise that Baker enjoyed spectacles even as a civil servant, since he …

This image shows a photograph from the early 1920s, probably in Portland, in which robed and hooded Ku Klux Klan members share a stage with members of the Royal Riders of the Red Robe, a Klan auxiliary for foreign-born white Protestants. A large banner reading “Jesus Saves” occupies a prominent …