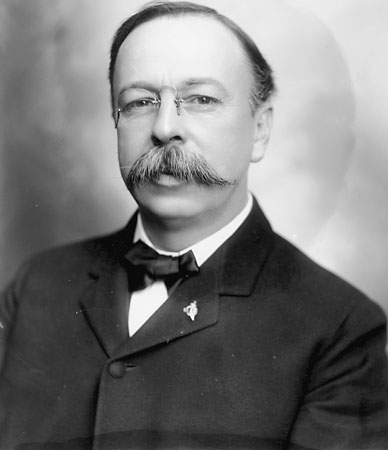 On January 19, 1909, the Republican controlled Oregon Legislature chose Democrat George Chamberlain to represent the state in the U.S. Senate. Chamberlain, who had also served as governor, had won a plurality of the popular vote the previous June. He managed to secure the election because voters had elicited promises from legislative candidates that they would elect the senatorial candidate who received the largest popular vote. Chamberlain’s election was a test of legislators’ willingness to follow popular will in senatorial contests and helped establish a national trend that culminated in the ratification of the seventeenth amendment in 1913.

Born in 1854 in Mississippi, Chamberlain attended public schools. He entered Washington and Lee University in Virginia in 1872. Four years later Chamberlain graduated with a degree in law and immigrated to Oregon, where he got a job teaching near Albany. The next year he was admitted to the bar in Oregon. In 1878 he volunteered to fight Indians in Eastern Oregon. After serving as deputy clerk of Linn County in 1878 and 1879, Chamberlain began to practice law in Albany. From 1880 to 1884 Chamberlain served in the state legislature. Two years into his term he became editor of the Albany State’s Rights Democrat. After leaving the legislature, Chamberlain served two years as District Attorney of Oregon’s third judicial district. From 1891 to 1895 he served as Oregon’s first attorney general.

Running a non-partisan gubernatorial campaign in 1902, Chamberlain promised to support the initiative and referendum movement. He faced a divided Republican Party and managed to defeat Republican William Furnish by a margin of just 246 votes. Chamberlain increased his margin of victory to 3,000 votes when he was re-elected four years later. In office, Chamberlain nominated Republicans for office, drawing criticism from Democrats when he nominated three Republicans for judgeships. He also supported the Oregon system, political reform, increased regulation of railroads, and tougher enforcement of fishing regulations.

Chamberlain ran for Senate in 1908 while still serving as governor. After winning the popular election in 1908, some legislators asked Chamberlain to resign the governorship before being elected senator. Chamberlain, upholding his reputation as a clean politician and democratic reformer, refused to resign in exchange for election to the senate, saying the move would violate the recently approved corrupt practices act. Chamberlain won reelection in 1915. As a senator, he helped devise the military draft during World War I. He also helped develop flood control procedures.

After leaving the Senate in 1921, Chamberlain served on the United States Shipping Board until 1923. He practiced law in Washington, D.C., until his death in 1928.

From Frederick Mellis to Governor Chamberlain

This letter was written by Baker City businessman Frederick Mellis to Oregon Governor George Chamberlain on July 24, 1903. It discusses the mining industry’s opposition to the establishment of forest reserves in northeastern Oregon.

In 1901, a group of Baker County residents submitted a petition to their congressional representative calling …