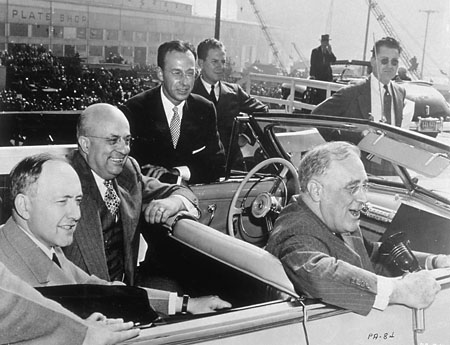 Though he rarely visited Oregon, Henry Kaiser was an influential industrialist whose successful ventures in manufacturing and health care significantly impacted the state. Kaiser was born in Sprout Brook, New York, in 1882, and moved to Spokane, Washington, in 1906. In 1914, with his wife Bess Fosburg Kaiser, he founded the Henry J. Kaiser Company, which specialized in road paving. He expanded his industrial empire over the years and, by the time of Franklin D. Roosevelt's administration in the 1930s, it was one of the “Six Companies" that attracted lucrative federal contracts including those for the Boulder (now Hoover), Bonneville, and Grand Coulee dams.

During World War II, Kaiser owned three shipyards in Portland and Vancouver, Washington, through his firm Kaiser Industries. At their peak, these shipyards employed more than 130,000 workers in the Portland area. This photograph shows Henry J. Kaiser (back seat left) with Governor Charles Sprague (back seat right) and President Franklin D. Roosevelt (front seat right) during a presidential visit to Kaiser’s Portland Shipyards in 1942. Labor shortages in the region prompted Kaiser to recruit workers from around the country. Since local officials did not want to build housing for these newcomers, many of whom were African American, in 1942 Kaiser purchased and developed land in the Colombia River floodplain at the far northern edge of Portland. The property—named Vanport because of its central location between the cities of Portland and Vancouver—was the state's second largest city during World War II. However, on May 30, 1948, Vanport was swept away by a massive Columbia River flood.

With the end of World War II, Kaiser was forced to close his operations in Portland and Vancouver after attempting unsuccessfully to convert his mammoth shipyards into other industrial manufacturing facilities. In spite of this failure and an ill-fated foray into the automobile business in the 1950s, Kaiser Industries, based in Oakland, California, continued to enlarge during post-war era. Of the industries and causes with which Kaiser was involved, he is probably most remembered for his work in healthcare. To prevent illness among the workers on the Grand Coulee Dam, he offered affordable coverage by creating a comprehensive, pre-paid program. Known as Kaiser Permanente, the program currently has subscribers in California, Colorado, Georgia, Hawai‘i, Oregon, Washington, D.C., and Washington State. When Henry Kaiser died in Hawai‘i on August 24, 1967, he left most of his enormous fortune to the Kaiser Family Foundation for health-related research.

This illustration was published in a short-lived weekly newspaper produced by the Columbia River Shipbuilding Corporation (CRSC). Win the War, later renamed The Pilot, was issued in 1918 and 1919 to company employees, who built steel steamships on the Willamette River in Portland from 1916 to 1921.