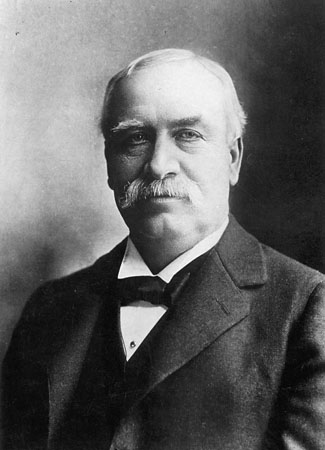 When the first transcontinental train rolled into Portland on September 11, 1883, the Oregonian described the ensuing celebration as “the greatest display ever witnessed in this city.” The man largely responsible for the completion of the transcontinental line was Henry Villard.

Villard was born Ferdinand Heinrich Gustav Hilgard in 1835 in Speyer, Bavaria. When he was 18, he changed his name and immigrated to the United States. After spending a year on a relative's farm in Illinois studying law, Villard became a journalist. He reported on the Civil War for Eastern papers. After marrying Fanny Garrison and returning to Germany for several years, Villard moved to Portland in 1874 as a representative of a group of Germans who had loaned Ben Holladay money to build a railroad from Portland to San Francisco.

Holladay's business was hurt by the financial crisis of 1873 and he fell behind in his payments to Villard's employers. Villard, with the help of Portland and New York bankers, was able to buy the Oregon Railway and Navigation Company because it continued to do poorly after Holladay defaulted on his loans. The OR & N Co. did well under Villard's direction and he planned to make Portland the West Coast hub of a transcontinental railway.

In 1880, another company, the Northern Pacific Railroad, which was building its own line to Puget Sound, threatened Villard's plans. He responded by calling on his banking contacts and raising over $8,000,000 in a blind pool (a pool investors contributed to without knowing what Villard intended to do with their money) to buy the rival company. Villard's railroad companies made swift progress and completed the transcontinental railroad to Portland in 1883. By that time, however, his companies were doing poorly. Villard was voted out of the presidency of all his companies in early January 1884 and returned to Germany, where he spent three years recouping his fortune. He returned to the United States and became chairman of the Northern Pacific in 1889 and president of Edison General Electric in 1890.

Although Portland gained a railroad connection from Villard, Portlanders who invested in his companies lost two to three million dollars among them.

On Christmas Eve 1869, the first train from Portland arrived in the small town of New Era, twenty miles away on the east side of the Willamette River. Benjamin Holladay, a driving force behind the road, was one of the passengers. A year and a half earlier, two railways …