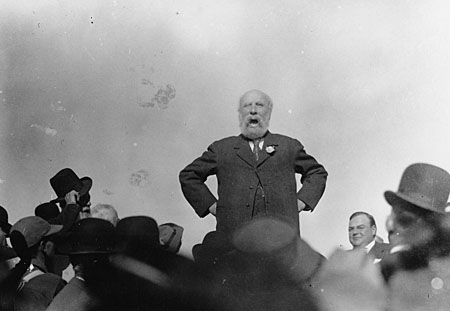 In 1912 James J. Hill said of his Great Northern Railway, “The financial outlook of this company is as well assured as that of most governments.” Unlike most other transcontinental lines, the Great Northern expanded west without relying on government subsidies and land grants. Instead, it built branch lines and promoted agricultural and industrial development to create freight and passenger revenue. The strategy contributed to economic growth in Eastern Oregon and made Hill one of the financial giants of the early twentieth century, earning him the nickname “Empire Builder.”

Born in Rockwood, Ontario, in 1838, Hill attended both public and private schools. When his father died in 1852, Hill quit school for a job in a general store. In 1856, Hill left home intending to travel to Asia, but finding the trip prohibitively expensive, he traveled as far as Minnesota and settled in St. Paul. There he landed a series of jobs with wholesale distribution companies. In 1865, Hill went into business for himself as an independent transportation agent. In 1870, he and his partners established the Red River Transportation Company, opening steam boat travel between St. Paul and Winnipeg. Eight years later Hill secured his first railroad, the St. Paul and Pacific, later the St. Paul, Minneapolis and Manitoba.

In 1890, Hill and his partners decided to extend their western line to the Pacific. They set up a new corporation, calling it the Great Northern Railway, which reached Puget Sound three years later. After competing with E.H. Harriman's Union Pacific for control of the Chicago, Burlington and Quincy, Hill and his partner J.P. Morgan called a truce with Harriman and created the Northern Securities in 1901, uniting the Great Northern, Northern Pacific, and Chicago, Burlington and Quincy railways. The company was large and, with two transcontinental lines to its credit, monopolistic. The government dismantled it in 1904.

Toward the end of his career, Hill built the Oregon Trunk Railway to connect Bend with his line on the north bank of the Columbia. To make the line profitable, he promoted the Bend area as an agricultural garden spot. Some settlers were disappointed, finding the altitude and aridity of the region a hindrance to agriculture. Similar sentiments among settlers on the Northern Plains earned Hill a dubious legacy in the form of this schoolyard rhyme:

Twixt Hill and Hell there's just one letter. Were Hill in Hell we'd feel much better.