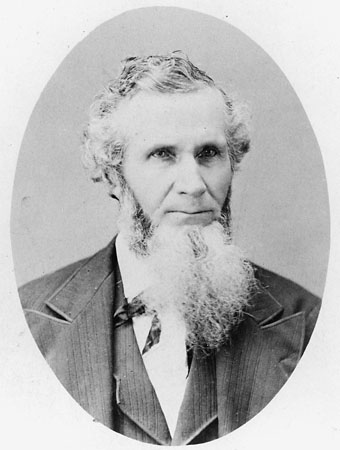 On October 7, 1845, Joel Palmer made the first recorded climb on Mount Hood. He wore moccasins that exposed his feet to ice and carried little food. After attempting to lead twenty-three wagons over the south shoulder of the mountain, Palmer lost his way. He climbed to the 9,000-foot level to survey a route off the mountain so that he and his party could escape the high elevation before winter. Facing winter, Palmer's party stashed its wagons on the mountain and proceeded to Oregon City on foot. Palmer's first Oregon venture was not a success. Despite his initial difficulty, Palmer went on to become an influential Indian Agent, a state legislator, and a successful town booster.

Born in Ontario, Canada, to American Quakers, Palmer and his family moved to New York in 1812 after war broke out between Britain and the United States. When he was twelve, Palmer's family indentured him to another family for four years. Gaining his freedom at age sixteen, Palmer moved to Pennsylvania. In 1836 he moved to Indiana. He was elected to the legislature there in 1843 and served two one-year terms. He married Catherine Coffee in 1830. After Catherine died, he married Sarah Ann Derbyshire in 1836.

In 1845, Palmer traveled to Oregon as captain of a small wagon party. After making the last leg of the difficult journey on foot, Palmer returned to Indiana the next year. In 1847 he published a popular guide book, Journal of Travels Over the Rocky Mountains to the Mouth of the Columbia River. That same year he returned to Oregon with his family. Soon after arriving in Oregon, he served as commissary general of volunteers in the Cayuse War. After the war, Palmer traveled to California's gold fields, but he soon returned and co-founded the town of Dayton in Yamhill County.

In 1853, President Franklin Pierce appointed Palmer Superintendent of Indian Affairs for the Oregon Territory. Facing a growing settler population, Palmer advocated a policy of Indian removal. He supported the creation of reservations east of the Cascades and west of the Coast Range, hoping to distance Native Americans from whites. Palmer's tenure as superintendent saw conflict between settlers and Natives and he gained a reputation among settlers for favoring the Native Americans. The situation came to a head in late 1855 when Palmer attempted to move Rogue River Indians onto the Grand Ronde Reservation, land coveted by settlers who threatened violent resistance to the move. Although he succeeded in moving the Indians, his actions caused the state legislature to petition for his removal. The petition to remove Palmer from his position succeeded in 1856.

Despite his unpopularity with settlers, Palmer was elected speaker of the state house in 1862 and state senator in 1864. He narrowly lost the 1870 gubernatorial race.

Palmer died in Dayton in 1881, having shaped the Pacific Northwest's reservation system.