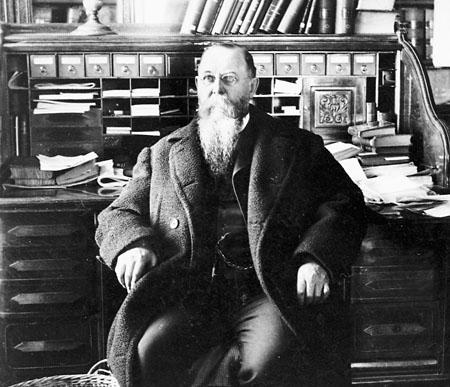 This circa 1898 photograph shows John H. Mitchell, a U.S. Senator elected by the Oregon state legislature in 1874, 1885, 1891, and 1901. He wielded substantial power in Washington D.C. in spite of Oregon's small population. Mitchell secured funding to build the Cascade Locks and various lighthouses in the state and to improve navigation channels of the state's rivers. He also promoted the Lewis and Clark Centennial Exposition of 1905 and served on several Senate committees.

While successful in many ways, Mitchell's twenty-two years in office (intermittent, 1874-1905) were also shadowed by controversy. It is likely that most of his early agenda benefited the transport tycoon Ben Holladay. Additionally, Mitchell's tireless attempts to withdraw federal treaties for the vast Coastal Indian Reservation and open it to Anglo settlement were shaped by the interests of the timber industry who saw valuable lumber in the area.

Born John Mitchell Hipple in Washington County, Pennsylvania, in 1835, Mitchell taught school as a young man. His first wife, Sadie Hoon, was one of his students. In 1857, he began practicing law, but soon left for California with his mistress, Maria J. Brinker, and $4,000 from his law firm that he later repaid. In 1860, he abandoned Brinker and moved to Oregon, where he changed his name to John H. Mitchell, opened a law firm, and, before divorcing his first wife, married Martha Price.

Mitchell is most remembered for his role in the Oregon land-ring scandals. A 1903 special investigation by the U.S. Department of the Interior revealed that three Portland timber barons had filed false land claims in remote areas of the Cascade Mountains with Mitchell's help in exchange for $2,000. In 1905 he was found guilty of fraud and conspiracy. Despite overwhelming evidence and a conviction, the Senator maintained his innocence and appealed the decision. Before his appeal could be heard, he died in Portland following a tooth extraction on December 8, 1905.