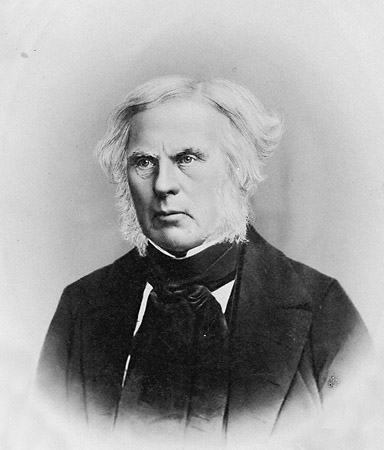 John McLoughlin was born in 1784 in Quebec, Canada, to a poor Catholic father and upper class Protestant mother. Apprenticing a physician, he became a doctor himself in 1803. McLoughlin fled Quebec that year after a scuffle with a British Army officer. He headed to the Canadian West to join the fur trade with the North West Company (NWC).

McLoughlin rose through the ranks of the NWC and later the Hudson's Bay Company (HBC). In 1824 he moved his family west and took control of HBC's Columbia district operations, establishing Fort Vancouver just north of Portland. In his years at Vancouver, McLoughlin maintained friendly relations with the local Chinook and Cowlitz Indian federations as well as the Nez Perce and Cayuse tribes farther east. Trading European goods for beaver pelts, McLoughlin turned a profit for the company and gradually built his own personal wealth. The company expanded its operations into various industries including farms, dairies, and lumber to become Britain's major foothold in the Oregon Country.

With the opening of the Oregon Trail in the 1840s and the influx of Americans in the Northwest, McLoughlin assisted the hungry and exhausted settlers with provisions. When HBC officials later criticized him for helping the immigrants, McLoughlin reasoned that his actions were humanitarian obligations and would provide HBC with a large customer base. However, the settler influx firmly established the U.S. claim to the Oregon Country, and in 1846, the U.S. and Britain agreed to extend the U.S. northern border at the 49th parallel to the Pacific.

McLoughlin retired and moved to his valuable Oregon City property the same year, eventually opening several businesses. Although he became an American citizen, McLoughlin was treated as a foreigner, and most of his substantial holdings were eventually expropriated by the U.S government. Nevertheless, he became a successful businessman thanks to his remaining assets before his death in 1857.

Early in the twentieth century, John McCloughlin's house along the Willamette River in Oregon City was threatened by demolition. In 1909, a group of citizens organized to have the house moved to the top of the bluff overlooking the river. Congress designated the house a National Historic Site in 1941—at the time the first such designation in the American West. Since 2003 the McLoughlin House has been part of the National Park System as a unit of the Fort Vancouver National Historic Site.