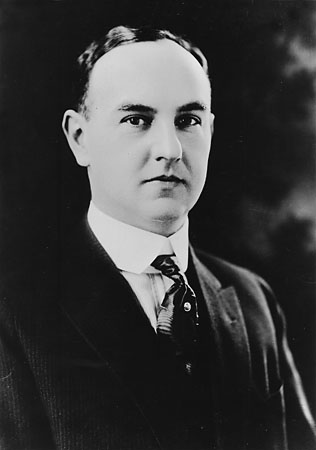 The son of Aaron Meier, a founder of the Meier & Frank department store chain, Julius Meier was born in 1874. After graduating from the University of Oregon Law School in 1895, Meier spent four years practicing law before joining the family business. He became store manager and vice president in 1910 and guided the store's impressive growth throughout the decade. He became involved in various civic affairs, notably in the construction of the Columbia River Scenic Highway and the unsuccessful campaign to bring a world's fair to Portland in 1925.

Meier's entry into state politics occurred after the unexpected death of George Joseph, the 1930 progressive Republican gubernatorial candidate. Joseph was a longtime friend and business partner of Meier, and when the Republican Party nominated a conservative candidate as a replacement, Meier decided to run. He went on to win as an independent, promising to be Joseph's successor and implementing his program.

Central to Joseph's campaign had been the promotion of publicly-owned power companies and assistance for the unemployed. Such policies were strongly opposed by the conservative business elite of Portland but were popular among Oregon voters in the midst of the Great Depression. Nearly 40,000 Oregonians were unemployed by 1933, and Meier saw such policies as necessary, not only on a humanitarian level, but also as protection against possible social unrest. He wrote President Herbert Hoover that “we must have help from the federal government if we are to avert suffering and possible uprisings.”

In addition to supporting government assistance programs, Meier bolstered the labor movement when he declined to intervene in a massive longshoremen's strike that paralyzed shipping in 1934. He promoted the creation of the Oregon State Police and became an avid supporter of the Bonneville Power Administration. A heart condition prevented him from seeking reelection in 1934, and he died of a heart attack in 1937.