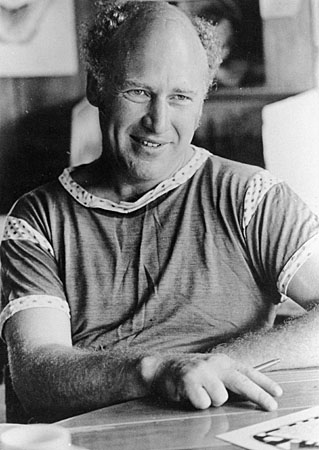 Ken Kesey was one of Oregon's most famous, critically acclaimed, and controversial authors. His rise to literary and cultural prominence was the product of his distinctive skills and experiences.

Kesey was born on September 17, 1935, in La Junta, Colorado, and in 1946 he and his family moved to Springfield, Oregon. In both high school and at the University of Oregon, Kesey was a champion wrestler. After earning a Bachelor of Arts degree from the University of Oregon's School of Journalism in 1957, Kesey attended Stanford University's creative writing program under the tutelage of acclaimed historian, novelist, and short story writer Wallace Stegner. While at Stanford, Kesey participated in U.S. Army experiments involving lysergic acid diethylamide (LSD) and mescalin. These hallucinogenic experiences would change Kesey's outlook on life and inspire his writings.

He published One Flew Over the Cuckoo's Nest in 1962 and the quintessential Oregon novel Sometimes a Great Notion in 1964. Both novels explore what Kesey saw as the conflict between modern industrial society and individuality, a struggle between conformity and freedom. This struggle was also central to Kesey's personal life, where he turned to psychedelic drugs to find personal liberation.

Considered a founding father of the 1960s counterculture, Kesey promoted drug use as a path to individual freedom. He founded a group known as the Merry Pranksters and in 1964 he and the Pranksters traveled the country in a day-glo colored school bus named "Further." This bus was sometimes piloted by Neal Cassady, a Beat icon made famous in Jack Kerouac's 1957 largely autobiographical novel On the Road. The Pranksters were notorious for their “acid tests” and became the inspiration for Tom Wolfe's book The Electric Kool-Aid Acid Test, published in 1968. The Pranksters also promoted the “Warlocks,” a band later known as the Grateful Dead.

In 1965, Kesey's drug use landed him in jail for six months. Upon his release, Kesey moved to a farm near Eugene to raise his family. He would publish a loosely organized memoir of his experiences in 1973's Kesey's Garage Sale. In 1975 One Flew Over the Cuckoo's Nest became an Oscar winning film and Kesey briefly worked as a professor of writing at the University of Oregon. He published his third novel, Sailor Song in 1992, and lived in Pleasant Hill, Oregon, until his death on November 10, 2001.