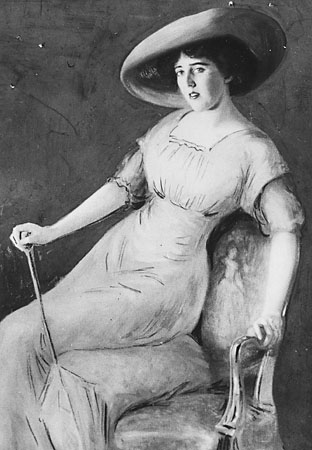 Louise Bryant was a celebrated journalist, radical, and feminist. Born in Nevada in 1885, Bryant graduated from the University of Oregon and married Paul Trullinger, a Portland dentist, in 1909. The couple lived on a houseboat in the Willamette River, but the independent-minded Louise maintained a separate apartment in Portland and kept her maiden name. Bryant joined Portland’s leftist circles and was active in Oregon’s women’s suffrage movement in 1912. She wrote articles for the local Spectator magazine and eventually was offered a position as society editor. Bryant was a regular reader of the national radical magazine The Masses. She was especially struck by articles written by Portland native John Reed, whom she met in 1914 or 1915 during a gathering of artists and radicals.

In early 1916, Bryant left Trullinger and Portland to live with Reed in New York. Reed introduced Bryant to many of the era’s famed leftists, and the couple became well known throughout the Greenwich Village radical community. When Reed became ill, the couple moved to Provincetown, Massachusetts, where Bryant began writing poetry and plays. Reed’s illness required a dangerous kidney operation, and the couple married in 1916 to ensure that Bryant was financially secure in the event of Reed’s death.

In 1917, Reed and Bryant traveled to Russia to report on the ongoing revolution. In 1919, Bryant testified before Congress. She defended the revolution and criticized American intervention in the Russian Civil War. Working as an international correspondent, Bryant completed several books and articles on Russia. She traveled back to Portland in 1919 to lecture an audience about the realities of the Russian revolution. After Reed’s death in 1920, Bryant preserved his collected works and continued her career as a journalist. She married William Bullitt, a prominent U.S. diplomat, in 1923 and gave birth to a daughter in 1924. Bullitt took custody of the child after a bitter divorce in 1930, and Bryant struggled economically. She contracted a rare degenerative illness and died in 1936.

For John Silas “Jack” Reed, the conservative, early twentieth-century city of Portland could never be “prepared to understand his dreams” of social revolution and change. Born in 1887, Reed grew up in a stately Portland mansion, attended the Portland Youth Academy and later, boarding school. Fascinated with the travels …