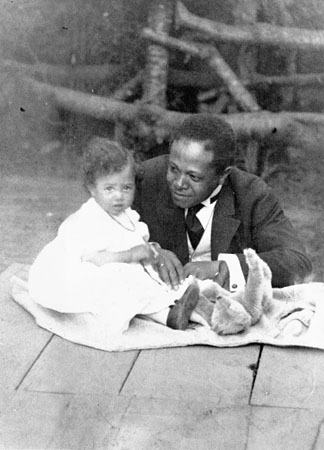 Born in Brooklyn, New York, McCants Stewart was the son of a respected black civic leader and confidant of Booker T. Washington. Washington, who advised African Americans that achieving economic prosperity would secure their political and civic rights, inspired Stewart's father, who instilled in his children the values of discipline, morality and self help. At age sixteen Stewart entered Washington's Tuskegee Institute in Alabama. Stewart resisted the strict discipline imposed by Tuskegee, and suffered a brief suspension before his eventual graduation in 1896.

After moving back to New York and receiving a law certificate the same year, Stewart began assisting his father's law practice. His father motivated Stewart to leave New York and enroll in the University of Minnesota Law School in 1897. He excelled as a graduate student and received his degree in 1899.

Stewart moved to Portland in 1902 and passed the bar the following year becoming Oregon's first African American lawyer. He married Mary Delia Weir in 1905 and later started a family. Stewart sought the respect of the legal community and of black leaders. He helped found a black newspaper, The Advocate.

The highlight of his legal career came in 1906 when Oliver Taylor sued the Star Theater of Portland after the management denied him seating because of his race. Stewart argued before the court that the government should ensure black rights and combat discrimination. The Oregon Supreme Court agreed and ruled in his favor. Though committed to Washington's philosophy, Stewart believed that black economic improvement must coincide with a proactive struggle for civil rights.

Portland's small black community could not provide Stewart with sufficient business, and throughout his career he struggled to earn a living. Further complicating his life, his leg was amputated after a streetcar accident in 1914 and he soon began losing his vision as well. Failing economically, Stewart moved his family to San Francisco in 1917, but was not economically successful there either.

Disabled and impoverished, Stewart died by his own hand in 1919.