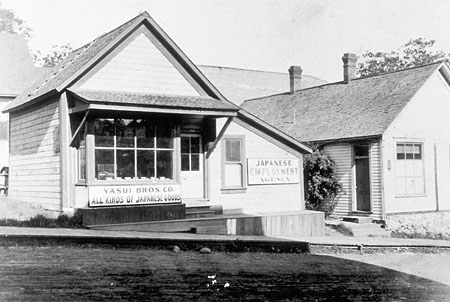 On March 28, 1942, around 11 P.M, after wandering the streets of Portland for three hours, Minoru Yasui walked into police headquarters and demanded that officers on duty arrest him. Yasui argued that he was violating General John DeWitt's presidentially authorized curfew on German and Italian nationals and all people of Japanese ancestry. A United States citizen of Japanese ancestry, Yasui considered the curfew's application to citizens to be unconstitutional and hoped to challenge his arrest and, by implication, government wartime treatment of Japanese Americans in court. Although unsuccessful in his legal challenges, Yasui went on to become an important civil rights advocate.

Born in Hood River in 1916, Yasui was the son of Masuo Yasui, one of three brothers who opened a variety store at the corner of First and Oak Streets in Hood River in July 1908. The Yasui Brothers, part of the pioneer Japanese Yasui family, were among the earliest merchants in the city.

Minoru Yasui attended Hood River public schools and the University of Oregon. At the university, he completed the U.S. Army's Reserve Officer Training Corps (ROTC) program and was commissioned as a second lieutenant when he graduated in 1937. After graduating, Yasui attended law school at the University of Oregon and became the first Japanese American lawyer in Oregon in 1939. Unable to find a job with an Oregon firm, Yasui moved to Chicago and worked for the Japanese consulate, where he abstracted U.S. news articles.

Shortly after the Japanese bombed Pearl Harbor in December 1941, Yasui resigned his position at the consulate to report for military duty. His services were refused nine times. In February 1942 Yasui set up a law firm in Portland to help Japanese Americans deal with legal problems the war created. Amid talk of internment, Yasui, the only Japanese American lawyer in Oregon, planned his legal challenge to the government's policies.

Yasui's case was tried in district court. In November 1942, Judge James Fee agreed with Yasui's contention that the curfew was illegally applied to citizens but then stripped him of his citizenship and sentenced him to a year in jail and a five thousand dollar fine. In 1943 his case was sent directly from district court to the United States Supreme Court, which reversed Judge Fee's ruling that the curfew was unconstitutional, reinstated Yasui's citizenship, and reduced his sentence. In 1943 Yasui was transferred to Minidoka Relocation Center in Idaho. He stayed there until 1944.

After the war, Yasui moved to Denver where he practiced law and worked for the cause of civil rights. In 1946 he married True Shibata. In the mid 1970s Yasui chaired the Japanese American Citizen League's national committee on redress. In 1984, he and others who had challenged internment reopened their cases after it was determined that the government presented false evidence in the trial and appellate courts. Oregon's district court overturned Yasui's conviction in 1986, but did not address the Constitutional question.

Minoru Yasui died in Denver in 1986. The city named a community service award after him. In 1988 Congress passed the Civil Liberties Act calling on the government to apologize for its internment policies. The act stipulated the government pay $20,000 to each surviving internee.