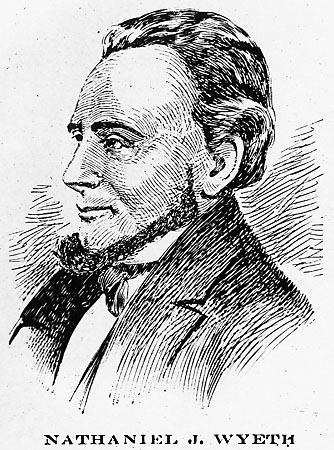 During his lifetime, Nathaniel Wyeth held fourteen patents related to the cutting and transportation of ice and ran a successful trade in ice between New England and the West Indies. He is most famous, however, for what became known as his two failures. In 1832 and 1834 Wyeth led overland expeditions to Oregon, intending to establish a trading empire. Both times he was plagued by bad luck.

Wyeth was born in 1802 in Cambridge, Massachusetts. Before he was thirty he began shipping ice to the West Indies, insulating it with sawdust. In 1831 Wyeth became associated with Oregon promoter Hall Jackson Kelly, a Boston teacher who hoped to colonize Oregon. Late in 1831 Wyeth began to doubt that Kelly's plan would come to fruition, so he organized a party of twenty men and departed for Oregon in 1832. Of the twenty, only eight made it to Fort Vancouver in October of that year. The rest deserted, or died of exposure, hunger, or wounds. To make matters worse, the supply ship Wyeth chartered to sail around Cape Horn and meet him in Oregon was wrecked at sea. After discharging his remaining men, Wyeth returned home, arriving in Cambridge in November of 1833.

Wyeth began planning another expedition almost immediately. He planned to trade with the Rocky Mountain Fur Company at the 1834 rendezvous and then proceed to Oregon where he hoped to export salmon and furs. Wyeth left St. Louis in 1834 with a party of seventy men and two hundred fifty horses. Among his party were the Methodist missionary Jason Lee and naturalists Thomas Nuttall and John Kirk Townsend. When Wyeth arrived at the rendezvous he found that competitors had preceded his party and exhausted the trade. Hoping to recuperate his losses by selling supplies to Indians and trappers, Wyeth established Fort Hall near what is now Pocatello, Idaho. The bulk of Wyeth's party then continued west, arriving at Fort Vancouver in September 1834. Wyeth established Fort Williams on Sauvie Island at the confluence of the Willamette and Columbia Rivers.

The botched trade with the Rocky Mountain Fur Company proved to be only the beginning of Wyeth's problems. Many of the men he hired deserted the company. Others became sick and made more miserable by persistently bad weather. Salmon fishing was poor. Perhaps worst of all, the ship that was supposed to supply Wyeth's enterprise arrived late after being damaged by lightening off the coast of South America. Although Wyeth did export some salmon, timber, and furs, he was unable to compete with the British government supported Hudson's Bay Company. He sold Fort Hall to the Company in 1837 for much less money than he thought it was worth.

After returning to the East Coast in 1836, Wyeth reentered the ice shipping business. He was successful in that until his death in 1856. Some of the men in his party, including Jason Lee, stayed in Oregon, forming the nucleus of the new American community there.

A businessman from Cambridge, Massachusetts, Nathaniel Wyeth played an important role in the Euro American colonization of the Pacific Northwest. As a result of his efforts to establish trading operations in the Columbia basin, he helped publicize the overland route to Oregon, and assisted the first group of Methodist missionaries …