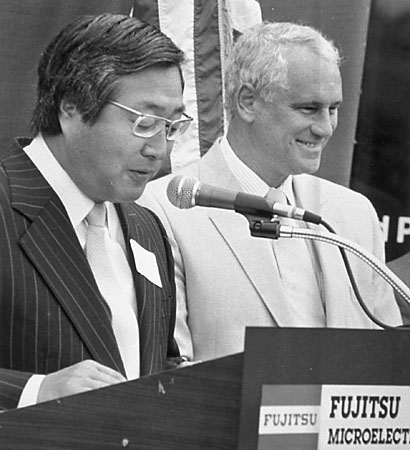 Best known for “The Oregon Comeback” during his governorship (1987-1991) that involved the revitalization of the state's economy, Neil Goldschmidt also served as Portland City Commissioner (1971-1973), Portland Mayor (1973-1979), and the U.S. Secretary of Transportation during the Carter administration (1979-1981).

After working as a legal aid attorney in Portland from 1967 to 1969, Goldschmidt began his political career when he was elected City Commissioner and served from 1971 to 1973. In 1973, at the age of 32, Goldschmidt was elected to serve as mayor of Portland. While Goldschmidt was mayor, Portland became a national model for public transportation as both light rail and a new transit center were constructed. Goldschmidt also worked to preserve old Portland neighborhoods, revitalize dilapidated housing, and diversify Portland's economy.

In 1979, President Jimmy Carter appointed Goldschmidt Secretary of Transportation. At the end of Carter's term in 1981, Goldschmidt returned to Oregon and joined the Nike Corporation until 1986 when he entered the Oregon gubernatorial race. He won the election by a margin of 52 to 48 percent on the promise of economic growth and expansion.

During Goldschmidt's tenure as governor from 1987 to 1991, he reinvigorated the state's economy through a series of reforms aimed at creating a favorable economic atmosphere for business development by bolstering the state's deteriorating infrastructure. Goldschmidt also created new ties with markets and economies world-wide including Japan, South Korea, Taiwan, France, and Germany. Furthermore, Goldschmidt forged a program to promote rural economic development. Unlike previous Oregon governors such as Tom McCall, for Goldschmidt environmental concerns were often secondary to revitalizing the state's economy.

Since the completion of his first and only term as governor, Goldschmidt runs a small law practice that specializes in strategic planning and problem solving for national and international businesses. He has also served on the board of several corporations, and the Oregon Health & Science University. In 1991, Goldschmidt and the Ater Wynne Hewitt Dodson & Skerrit law firm established the Oregon Children's Foundation, which organizes programs like “Start Making a Reader Today” (SMART) to help children learn to read.

In 2004, Willamette Week reported that while Goldschmidt was mayor of Portland in the 1970s, he sexually abused a fourteen year old girl. Goldschmidt eventually confessed to the abuse and resigned from his position as Chair of the State Board of Higher Education and other public boards. Willamette Week journalist Nigel Jaquiss received a Pulitzer Prize for his reporting.