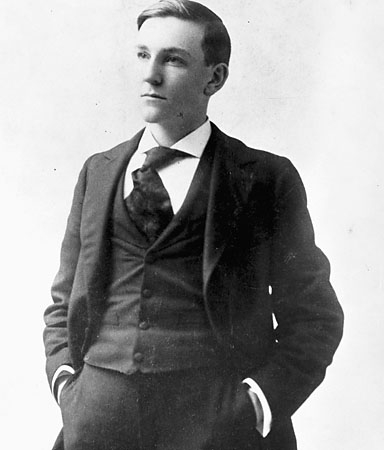 Oswald West was known for his fiery statements. A supporter of prohibition, he declared that one of his ambitions was “to shoot a bartender.” As governor from 1911 to 1915 West cracked down on drinking and gambling, in one instance using the Oregon National Guard to enforce martial law in the Eastern Oregon mining town of Copperfield. He also enacted numerous progressive reforms, but his most memorable accomplishment was the public seizure of Oregon's beaches in 1913.

Born in Ontario in 1873, West immigrated to Oregon when he was four years old and attended Portland and Salem schools. He began working at age fifteen and was, in succession, a bank teller, state land agent, and state railway commissioner. He married Mabel Hutton in 1897. Appointed state land agent in 1903, he investigated companies that systematically bought land from individuals paid to claim it fraudulently from the government. The ensuing trials led to convictions of numerous Oregon politicians, including United States Senator John H. Mitchell. The state recovered 900,000 acres of land and used it to fund the school system. After being appointed railway commissioner in 1907 and serving for three years, West decided to run as a Democrat for governor in 1910.

In office West supported the “Oregon system” of direct participation in government through the initiative and referendum. He asked activist Abigail Scott Duniway to write the statement proclaiming universal suffrage after voters approved the suffrage amendment in 1912.

West also spearheaded his own reforms. He influenced the creation of the Fish and Game commission, Highway Commission, and Industrial Accident Commission. West also influenced the creation of the State Board of Control in 1913, with power to oversee the management of state institutions and the construction of state buildings. In addition to the formation of these commissions, West advocated prison reform and industrial welfare measures. West's crowning achievement in office was the preservation of the wet sand area on Oregon's beaches as public property. Concerned with private exploitation of resources since his days as the state's land agent, West pushed a bill through the legislature in 1913 that declared much of Oregon's beaches to be public highways.

After leaving office in 1915, West practiced law in Portland. He continued to participate in politics, even after a heart attack in 1945, by writing newspaper columns.

When Oswald West died in 1960 the Oregon Journal declared, “Perhaps no one in the state's history leaves a more lasting impression on it than West.” Today a park north of Manzanita on the Oregon coast commemorates West's role in preserving the coast for Oregonians.