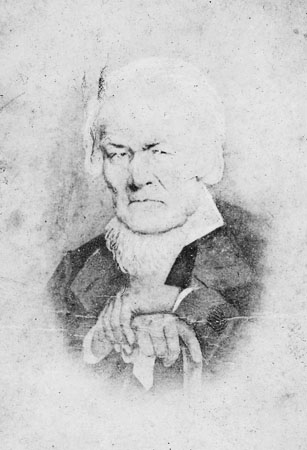 Patrick Gass, a member of the Lewis and Clark Expedition, is shown in this photograph, the original of which was probably taken around 1860. Gass’s left eye, which he lost in the 1810s, has probably been modified by the photographer.

Patrick Gass was born in Falling Springs, Pennsylvania, on June 12, 1771. He spent his early adulthood on the frontier, serving time in the militia and the regular army, and working as a carpenter’s apprentice. In the summer of 1803 Gass was serving in the U.S. Army in Kaskaskia, Illinois Territory, where he met a young captain by the name of Meriwether Lewis. The captain, impressed with Gass’s abilities, offered him a position on an exploratory expedition he was leading. Gass eagerly accepted the offer.

Three months into the Expedition, Sergeant Charles Floyd died suddenly, probably of appendicitis. Gass was promoted to the rank of sergeant after the men elected him to take Floyd's place. Noted for his carpentry skills, Gass probably supervised the construction of the Expedition's three winter quarters, Fort Dubois, Fort Mandan, and Fort Clatsop. He also made dugout canoes at several points during the Expedition and constructed wagons to help portage equipment around the Great Falls of the Missouri.

Gass was one of only six or seven Expedition members to keep a journal, leaving a terse but useful record of his experiences. Soon after returning from the Expedition, Gass contacted Philadelphia bookseller David McKeehan and arranged to have his journal published, much to the chagrin of Lewis, who was busy editing the official account of the journey. A heavily edited version of Gass’s account, the original of which has been lost, was published in 1807, the first publicly available record of the Expedition. This work was responsible for popularizing the term “Corps of Discovery,” which appeared on the title page.

Gass is also noteworthy for being one of only two Expedition members to have their photograph taken. At the age of 98, he was also the last living member of the Corps of Discovery. He died in April 1870 near Wellsburg, West Virginia, a few months before his ninety-ninth birthday.