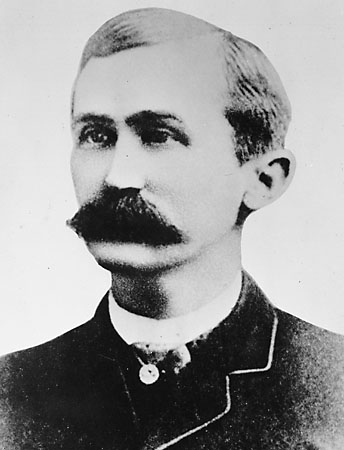 This photograph of Peter French (seated to the left next to his wife Ella) was taken on the extensive land he managed  in Harney County--a land large enough to require a number of ranch hands seen here surrounding him. French was one of the more successful landowners in eastern Oregon during the latter half of the 19th century, but his tight control of that land led to a sad end.

On December 26, 1897, Peter French was at work on his large ranch in Harney County when he saw Ed Oliver approach on horseback. French rode out to meet him. Oliver responded by charging his horse into French. French then struck Oliver and his horse with a willow whip. Oliver drew a gun. French turned and rode away. Oliver followed him for a few seconds and then shot French dead. French was one of Harney County’s largest landowners. Oliver owned a much smaller piece of land completely surrounded by French’s land and wanted a road easement through French’s land that French was reluctant to allow.

French was born John William French in Missouri in 1849. He came to California with his family when he was young. He left home as a teenager and landed a job with Hugh Glenn, the largest wheat grower in California. Glenn put French to work breaking horses on his ranch. The men he worked with liked French and gave him the nickname Peter, perhaps after his father. In 1872 Glenn sent French to establish a cattle ranch in Oregon, in exchange for partial ownership. French drove 1,200 cattle north to Harney County. There he bought a small ranch from a discouraged rancher and began to expand his operation. He controlled the Donner und Blitzen Valley between the Steens Mountains and Malheur Lake, along with Happy and Diamond Valleys and parts of Catlow Valley. French married Glenn’s daughter, Ella, in 1883. They divorced in 1891.

French’s employees liked him, but his neighbors did not. Settlers in Harney County worried that large cattle operations, such as French’s, hindered commercial growth by limiting the amount of land available to attract settlers. Moreover, French aggressively sought additional land. He fenced 30,000 acres of the public domain and between 1882 and 1889 fraudulently bought 16,000 acres of land claimed from the public domain by his employees. In 1894, French sued to exclude settlers from land exposed by the recession of Malheur Lake. Although he lost, the suit infuriated the local settlers, many of whom stood to lose their land.

French and Oliver had been hostile to each other for nearly ten years when the conflict that led to French’s death began in 1897. Oliver asked the county court to grant a road easement through French’s property. The court allowed the road to be surveyed, but in November French responded by suing the county for the removal of the road. After French’s murder in December, a Harney County jury acquitted Oliver, citing self defense. Frenchglen in Harney County is named for Peter French and Hugh Glenn.

This photograph shows an unusual structure known today as the French Round Barn, located in Harney County between Malheur Lake and the town of Diamond. The photograph is undated but it was probably taken between the mid-1960s and the late 1980s.