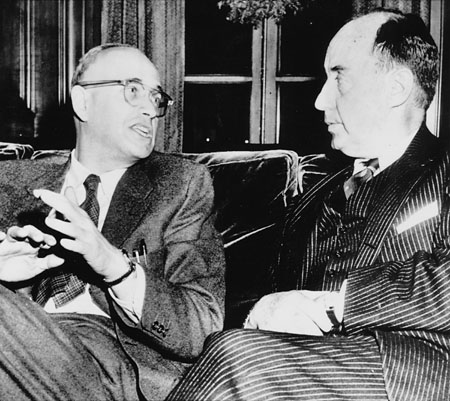 When Oregon senator and journalist Richard Neuberger died in 1960, the New York Times wrote of him:

Perhaps the one thing on which political friends and foes of Senator Neuberger were able to agree was that he could not be ignored. One was either strongly on his side or as vehemently against him.

The paper went on to explain that Neuberger always took a position on a controversial subject. Neuberger was known as a dedicated politician and influential writer.

Richard Neuberger was born in Portland in 1912 and attended public schools. He took an early interest in journalism and served as a sports reporter for his high school newspaper. While Neuberger was in high school, he met Lair Gregory, sports editor for the Oregonian. Neuberger worked for Gregory for a year after graduating from high school and before enrolling at the University of Oregon in 1931. In his sophomore year, Neuberger became editor of the university's paper, the Oregon Daily Emerald. As editor he campaigned against mandatory ROTC training, compulsory student fees, and the influence of fraternities.

Distracted by his numerous political projects, Neuberger did not earn a bachelors degree. After three years as an undergraduate, he decided to go directly to law school. After dodging academic dishonesty allegations and receiving pressure from Dean (and later United States Senator) Wayne Morse, Neuberger left law school without a degree and continued his career as a writer.

In 1933 Neuberber published his first national magazine article, a piece on the status of Jews in Germany. The next year he authored his first signed New York Times article. Two years later, while working as a reporter for the Oregonian, Neuberger was named Pacific Northwest correspondent for the New York Times. Over the next three decades, Neuberger published hundreds of articles and six books.

After two unsuccessful campaigns for election to the Oregon state legislature, Neuberger won a seat shortly before the United States entered World War II. From 1942 to 1945 Neuberger served in the army. He married Maurine Brown in 1945 after being discharged from the Army. In 1949 he made another successful run for the legislature. Two years later his wife Maurine Neuberger was elected to the Oregon House of Representatives. In 1954 Neuberger won a seat in the United States Senate, where he advocated environmental measures, civil rights, increased funding for cancer research, the ability of voters to recall Senators from office, conflict of interest laws, and Alaska statehood.

Richard Neuberger died in 1960. His last years in the Senate featured a feud with fellow Oregon Senator Wayne Morse. The two were both from the liberal wing of the Democratic Party and the disagreement might have had more to do with personality than politics. Maurine Neuberger succeeded Richard as Senator and won re-election later that year, becoming only the third woman to win election to the United States Senate.