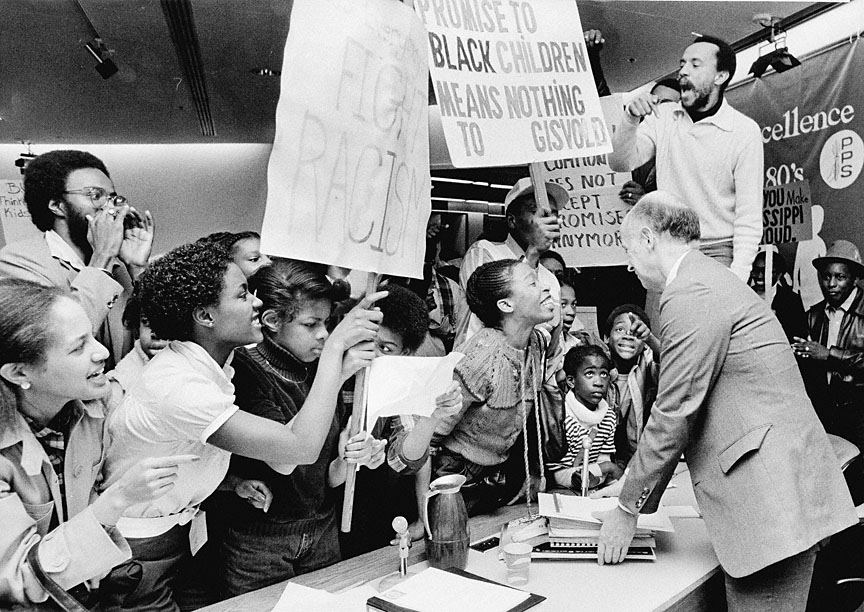 Ron Herndon is a long-time activist for minority rights and educational opportunities in Portland. Born in Kansas, Herndon arrived in Portland in 1968 to attend Reed College, where he graduated with a degree in history in 1970. Herndon's activist work focuses on the educational disparities and the disadvantages faced by African Americans.

Herndon helped lobby Reed college administrators to establish a Black Studies program in 1968. He founded a bookstore and the now-defunct Black Education Center, an independent school, in 1970. He later organized the Portland chapter of the Black United Front (BUF) to advocate the improvement of substandard Northeast Portland schools. Working with the BUF, Herndon led a protest in 1982 at a Portland School Board meeting demanding that predominantly African American Tubman Middle School remain open. Herndon felt the closure would adversely affect education by forcing students to commute long distances to other schools. He organized a one-day walkout by over 4,000 African American children and was successful in preventing the closure. In 1983 he worked with Nike to bring the brand's first outlet store to an economically depressed neighborhood in North Portland. In 1984, Herndon was arrested for trespassing on the consulate of South Africa as he led a protest against that country's policy of apartheid.

Herndon's public advocacy has been closely scrutinized by local police and federal agents. As reported in 2002 by the Portland Tribune, the police intelligence unit illegally created and maintained files on the political activities and personal life of activists during the 1970s and 1980s, including that of Herndon.

After nearly three decades of activism and experience in the field of education, Herndon became the director of Albina Head Start School in Northeast Portland. He later became chairman of the board of the National Head Start Association, an early education advocacy group.