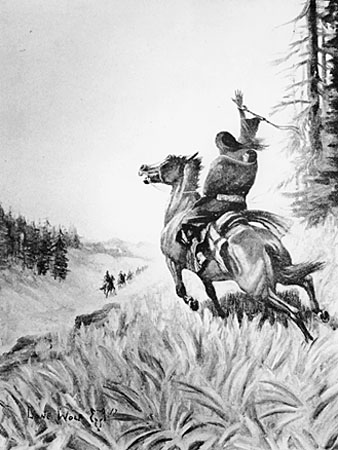 This illustration by Hart M. Schultz (“Lone Wolf”) appeared in a 1918 novel by the artist's father, James Willard Schultz. It depicts Sacagawea, the young Shoshone woman who accompanied the Corps of Discovery in their exploration of western North America. She is shown riding a horse with her baby on her back, waving to William Clark, labeled “Red Hair” in the caption.

Sacagawea was probably born in the late 1780s in present-day Idaho's Lemhi Valley. She was taken captive by Hidatsa raiders when she was around 12 or 13 and sold to a French-Canadian fur trader named Toussaint Charbonneau.

The first reference to Sacagawea in the historical record is in November 1804, when the Corps of Discovery was wintering in the Knife River Indian villages near present-day Stanton, North Dakota. Sergeant John Ordway noted in his journal that he had met a French fur trader and his “squaw,” a derogatory term referring to Native women. Although Ordway does not mention the fact, at this time the Shoshone teenager would have been several months pregnant with her first and probably only son, Jean Baptiste Charbonneau.

A few months later Sacagawea, her newborn baby, and her husband left the Knife River villages with the Corps of Discovery on their journey westward. William Clark noted that she and her husband were hired to act as “Interpreter and interpretress for the snake [Shoshone] Indians.”

The Expedition journals make note of her service as an interpreter and mention that she pointed out familiar landmarks when they entered Shoshone territory. There is little evidence to suggest, however, that she acted as the Expedition's guide beyond recognizing Bozeman Pass as a good place to cross the Continental Divide.

Little is known about Sacagawea after she and her husband left the Expedition at the Knife River villages in August 1806. There has been some controversy over the date and location of her death, but most scholars agree that she probably died in 1812 at Fort Manuel in present-day South Dakota.