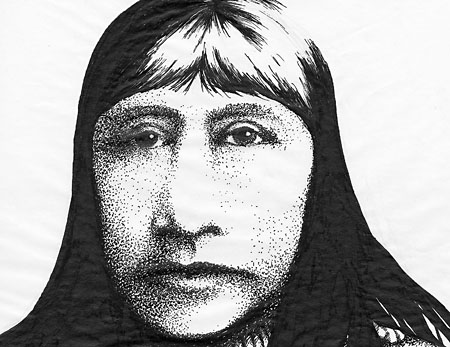 Sarah Winnemucca was an accomplished and controversial advocate of Native American rights in the post-Civil War period. Born in 1844, Winnemucca grew up in the arid Great Basin of Nevada and Southeastern Oregon. She was a member of the Winnemucca Paiutes, a small band composed of several related families led by her father. Both Sarah and her father avoided open conflict with Euro American settlers, believing that warfare was unwise given the superior firepower of the U.S. Army. Sarah first became acquainted with the settlers and learned English when her grandfather placed her as a servant in a white household.

Sarah entered the national spotlight in 1864 by appealing for humanitarian assistance for a collection of Paiutes on the Pyramid Lake Reservation, where the group nearly starved after losing its traditional lands. She continued to advocate for Native people during the Bannock War of 1878 when she worked as a U.S. Army scout and mediator. After the conflict, Sarah received national attention when she campaigned for Native education programs and reservation reform.

Although she was criticized by some Native peoples as a collaborator and traitor, Sarah believed that violent resistance was counterproductive, and that appeals for reform could improve Paiute conditions. After lecturing to audiences on both coasts, Sarah met President Rutherford B. Hayes in 1878. Sarah lobbied him for assistance and the right to move the Paiutes back to the Great Basin. But her efforts were in vain, and the Federal government failed to follow through.

After lecturing and writing an autobiography in 1883 entitled Life Among the Piutes: Their Wrongs and Claims, Sarah moved to Nevada to open a school for Paiute children. Although her efforts to change policy initially failed, Sarah is remembered for overcoming the stereotypes of her gender and race to raise public awareness of the harsh conditions Native Americans endured in the late 1800s.