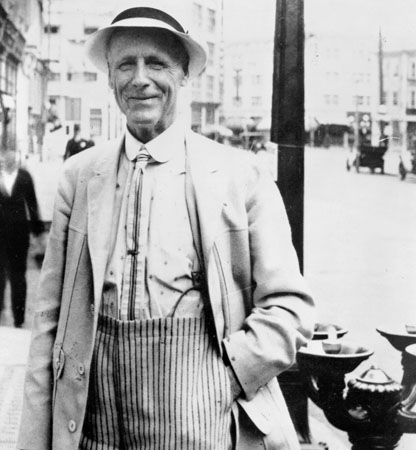 In 1891, lumberman Simon Benson bought $6000 worth of used iron and built a railway into his Washington timberland. Over the next 18 years, Benson changed Pacific Northwest logging by introducing steam power and ocean-going log rafts. With his new technology, Benson developed a large lumber operation spread over thousands of acres. After selling his company in 1909, he became involved in civic affairs as promoter of the Columbia River Highway and benefactor of Benson High School.

Born Simon Berger Iversen in Norway in 1851, Benson moved with his family to the United States when he was sixteen. After settling in Wisconsin, the Iversen family changed their name to Benson and filed naturalization papers.

Over the next few years Benson learned English and worked various farming and lumbering jobs. He married Ester Searle in 1876. That year he opened a store and operated it profitably until it burned down in 1879. Hoping to find work in a logging camp after the store burned, Benson traveled with his wife and child to Portland. He found a job near St. Helens. In 1880 Benson bought 160 acres of land and started his own business. He was forced to sell in 1883 when his wife became ill. After she died in 1890, Benson started another logging operation. He married Pamelia Loomis in 1894. The two divorced and in 1920 Benson married again, this time to Harriet King, whom he later divorced.

In 1891, Benson began to mechanize his logging operation. He built railroads into the forests to carry logs to the Columbia River where they could be shipped to mills. In the late 1890s he became the first lumberman in the Pacific Northwest to use steam power to yard felled trees. With this new technology Benson cut his expenses and expanded his holdings. In 1902 he sold his Washington land and began buying land in Oregon, eventually owning 45,000 acres. Hoping to cut down on transportation costs to the California market, Benson developed a successful ocean-going log raft in 1906. These rafts were often 1000 feet long and contained 6 million board feet of lumber. In 1909, Benson sold his holdings and retired from the lumber business.

In 1912, Benson built the Portland hotel bearing his name. That same year he donated 20 bronze drinking fountains to the city of Portland—quickly nicknamed Benson Bubblers—hoping to provide people with an alternative to taverns. In 1915, he donated money to build Benson Polytechnic School.

Benson later claimed that his donations had practical purposes. He hoped that the fountains would reduce drinking and associated accidents at his logging camps. Benson also hoped that his trade school would curtail the influence of the Industrial Workers of the World (then unionizing Pacific Northwest loggers) by imbuing young people with conservatism he associated with learning a trade. Benson also promoted the construction of the Columbia River Highway, donating land for Benson Park and Multnomah Falls along the road. In 1921, he constructed the Columbia Gorge Hotel near Hood River.

Benson moved to California in 1920 after marrying Harriet King. He lived there for the next 22 years and developed land in Beverly Hills.

Simon Benson died in 1942. Benson High School, the Benson Hotel, Benson State Park, and the Benson fountains are named for him.

Benson was an inventive lumberman, concerned with efficiency. At his lumber company, Benson replaced oxen, used to …