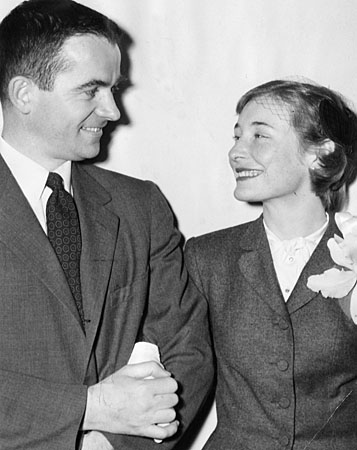 Born in 1914 in California, Stanley Moore was a distinguished philosophy professor and the most visible Oregonian investigated by anti-communists in the McCarthy era. Attending University of California and Harvard, Moore received his doctorate in 1940, served overseas in the Air Force, and returned to the United States to teach at Reed College, eventually becoming a popular, tenured professor.

Moore's Marxist beliefs and previous Communist Party membership made him a target of the House Un-Americans Activities Committee (HUAC). The committee sought to expose American communists throughout the 1950s, and in 1954 Moore was subpoenaed along with other suspected leftists. In a public hearing in Portland, Moore pled the Fifth Amendment when queried by the committee about his political beliefs. His testimony resulted in his suspension from the Reed faculty. Moore criticized McCarthyism in an open letter to the public by arguing that academic independence and tenure should protect his job: “It is an abuse of power for an employer to question an employee about his politics. It is a travesty of justice to do so in an atmosphere created by pressure from influential demagogues.” Thanks to the support of his colleagues and students, the principle of academic freedom endured “the most definitive test during the entire McCarthy era.”

In August 1954, the college trustees held a hearing to decide Moore's fate. Under pressure from the media and the generally conservative population of Portland to punish Moore, the trustees contended that his refusal to answer charges amounted to professional misconduct. Moore replied that academic freedom meant employment criteria based on professional ability, not personal political beliefs. Moore contended that his promotions and reputation as a scholar and teacher proved he was a competent professor.

As he expected, Moore won the argument but lost his job. After finding only intermittent work for a decade, he taught at the University of California, San Diego, from 1965 until he retired in 1974. In a 1978 interview with the Oregonian, Moore admitted to being a member of the Communist Party, but said that he had left the party eighteen months before the HUAC hearings after becoming disillusioned with the Soviet Union. Reed College issued an apology in 1981, and in 1993 Moore was invited to give a lecture at the college.