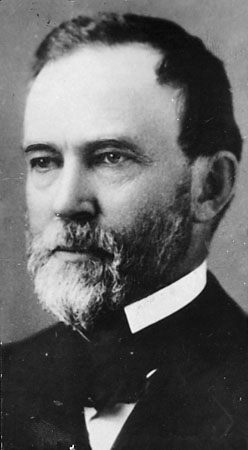 Grover Cleveland asked Oregon Governor Sylvester Pennoyer to do what he could to prevent expected violence against Chinese immigrants. Pennoyer, an avowed states' rights advocate and no friend of Oregon's Chinese, responded by telegraphing Secretary of State Q.W. Gresham, “I will attend to my business; let the President attend to his.” Two years earlier Pennoyer had refused to meet President Benjamin Harrison at the Oregon border, saying the two men represented their governments in equal capacities and that the President ought to first pay his respects at Salem. These statements are emblematic of Pennoyer's colorful and controversial role in Oregon politics that earned him the nickname "Pennoyer the Annoyer."

Born in New York in 1831, Pennoyer attended Homer Academy. In 1853 he left home to attend Harvard and graduated the next year with a degree in law. Leaving the East Coast in 1855, Pennoyer arrived in Oregon and landed a teaching job in Portland. He sympathized with the Confederacy during the Civil War. He left teaching in 1862 to enter the lumber business. In 1868 he gained recognition for his editorial stances as the editor of the Oregon Herald. In 1885 and 1886 Pennoyer led Oregon's anti-Chinese movement. He achieved statewide prominence when his anti-Chinese supporters hijacked an 1886 convention to protect the Chinese and elected him chairman of the convention.

The next year Pennoyer, a Democrat in a Republican state, rode the wave of anti-Chinese sentiment to the governor's office. In office, Pennoyer advocated populist causes such as abandoning the gold standard. He also gained a reputation for supporting labor. In 1888 he declined to use state troops to put down workers marching against the Corvallis and Eastern Railroad until the railroad paid the workers what they were due. Six years later Pennoyer again refused to act against workers when members of Coxey's army stole a train in their attempt to travel from the Pacific states to Washington, D.C., to present Congress with a petition for jobs. Pennoyer also persuaded the legislature to make Labor Day a state holiday and to amend the state constitution to include the position of attorney general.

Sylvester Pennoyer died in Portland in 1902, leaving behind a legacy as an anti-Chinese agitator, as well as a supporter of workers' and states' rights.