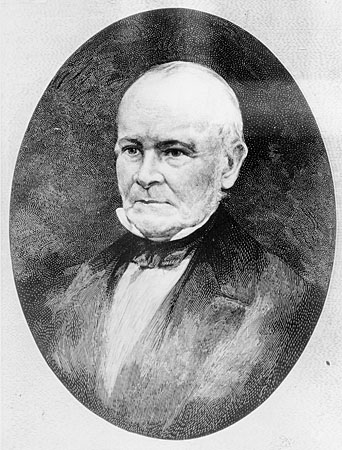 Pacific Fur Company traders declared Thomas Nuttall crazy in 1811. The voyagers made their assessment of Nuttall's sanity after finding dirt in the barrel of his gun. The naturalist had been digging plants with it. His unusual collection technique and disregard for personal safety notwithstanding, Nuttall was one of the preeminent botanists of his day.

Born in England in 1786, Nuttall apprenticed to his uncle as a printer. Hoping to improve his finances, Nuttall immigrated to the United States when he was twenty-two, settling in Philadelphia. There he pursued an interest in botany, encouraged by Philadelphia botanist Benjamin Smith Barton. Barton employed Nuttall to collect specimens on several expeditions that ranged from Delaware to the Great Lakes. On one of these trips, Nuttall learned of a planned trip up the Missouri River. Leaving his job with Barton, he journeyed to St. Louis and landed a job in a newspaper office. In 1811 he accompanied John Bradbury up the Missouri with the Pacific Fur Company party bound for Astoria. Returning late that year to the threat of war between the United States and Britain, he returned to England to prepare his specimens.

In 1814 Nuttall returned to the United States and after another expedition in the Southeast, published The Genera of North American Plants, and a Catalogue of the Species, to the Year 1817. In 1818 he set out again, this time for the Arkansas River and the Southwest. After publishing an account of the trip, Nuttall took a job as a professor of natural history at Harvard in early 1823. There, he published three more books about botany and ornithology.

Nuttall did not like his time at Harvard, and resigned in 1834 to travel to the Oregon country with Nathaniel Wyeth. Over the next two years, Nuttall collected along what would become the Oregon Trail, and in what are now the states of Oregon, Hawai‘i, and California. He returned by ship to Philadelphia in 1836. Over the next five years, Nuttall worked at the Academy of Natural Sciences in Philadelphia. In 1842 Nuttall returned to England to inherit an uncle's estate. The terms of the inheritance required Nuttall to remain in England nine months of every year. After this, he made only one more visit to the United States.