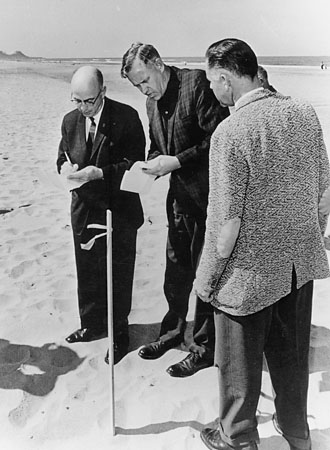 In 1971 at a Junior Chamber of Commerce Convention, Oregon Governor Tom McCall (1967–1975) told the delegates:

We want you to visit our State of Excitement often. Come again and again. But, for heaven's sake, don't move here to live.

Born in Massachusetts in 1913, McCall divided his time between his grandfather's Massachusetts estate and his father's Prineville area ranch until he was nine, when he moved to the ranch. McCall attended the University of Oregon and graduated with a degree in journalism in 1936. The next year he landed a job with the News-Review newspaper in Moscow, Idaho. In 1942, McCall moved to Portland and worked for the Oregonian and for KGW radio. He married Audrey Owen in 1939. McCall enlisted in the navy in 1944 and served as a war correspondent in the Pacific. After the war, McCall got a job as a talk show host on KEX radio. Over the next twenty years, McCall built a statewide reputation as a journalist. In 1962 he produced the award-winning television documentary Pollution in Paradise, which called for measures to abate air and water pollution in the Willamette River watershed and throughout the state.

McCall first entered politics in 1949 with a two-and-a-half-year stint as executive secretary to Governor Douglas McKay. In 1964 Republican Tom McCall successfully ran for Secretary of State, and two years later he was elected governor.

As governor, McCall advocated for an ambitious environmental agenda. Soon after assuming office, he appointed himself interim chairman of the Oregon State Sanitary Authority to push for strengthened state-wide water and air pollution regulations. In 1969 the legislature passed a comprehensive program to curb pollution that included the creation of the Oregon Department of Environmental Quality. In 1971 McCall pushed the “Bottle Bill” through the legislature; the measure was intended to reduce litter by requiring a consumer deposit on beer and soft drink containers. Two years later, in McCall's second term, the Oregon legislature passed Senate Bill 100. The law created the Land Conservation and Development Commission to oversee and implement Oregon's land use laws by rejecting or accepting proposed land use plans from around the state.

In 1970 the American Legion planned to hold a conference in Portland. A group of young anti-war activists calling themselves the People's Army Jamboree planned to protest. Although McCall supported the war in Vietnam, he had no desire for violence. McCall averted protests by sponsoring a rock concert, Vortex I, at McIver State Park; this concert was the first such event sponsored by a state government in the United States. Later, he was among the first Republicans to call for Nixon's resignation after the Watergate scandal.

McCall left office in 1975 and became a professor at Oregon State University and a news commentator. His national reputation for good government and farsightedness led some newspapers to mention him as a possible presidential candidate in 1976. He ran again, unsuccessfully, for governor in 1978.

Tom McCall died of cancer in 1983 in the midst of the state's worst economic downturn since the Great Depression. Some Oregonians associated McCall with the recession. Others remembered him as Democratic Governor Ted Kulungoski did in 2002: “Non-conformist. Fiercely independent. Plain spoken. Tolerant. And above all, in love with—and determined to protect—the natural beauty of Oregon.”

Portland's Waterfront Park is named for McCall in recognition of his efforts to clean up and protect Oregon's natural beauty.