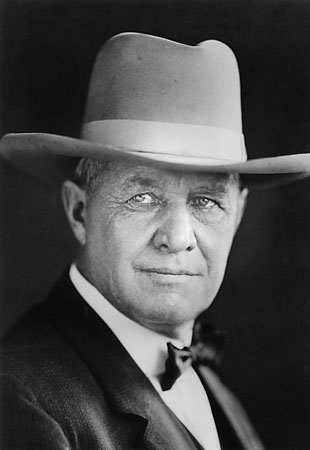 On November 26, 1933, the Oregonian remarked that rancher Walter Pierce was “an authority on biology as a breeder of white-faced calves.” The remark was an irreverent reference to Pierce's concern with eugenics, both as Oregon governor from 1923 to 1927 and as a congressman beginning in 1932. It also foreshadowed the ambiguous legacy Pierce was to leave behind. He supported progressive reforms but also had troubling connections to the Ku Klux Klan. As governor he benefitted from the Klan's support and advocated a number of its programs.

Born in Morris, Illinois, in 1861, Pierce came to Oregon with his family in 1883. He worked for several years as a ranch hand and school teacher before returning to Illinois to earn a law degree from Northwestern University in 1896. After earning his degree, Pierce practiced law in Pendleton, speculated in land, and owned and directed the power system of La Grande. Pierce married three times: to Clara Rudio in 1887; to Laura Rudio (Clara's sister) in 1893; and to Cornelia Marvin in 1928.

After holding several local offices, Pierce was elected to the state legislature in 1902. There, he cast the only vote against a bill criminalizing advocacy of violent upheaval, earning him a tentative reputation as a radical. Running with Klan support for governor in 1923, Pierce beat incumbent Governor George Olcott, a presumed Roman Catholic, winning more votes than any previous gubernatorial candidate. In his campaign, Pierce supported the Klan's compulsory public school attendance initiative, designed to prevent children from attending Catholic schools. The United States Supreme Court invalidated the law in 1925, holding in Pierce v. Society of Sisters that it unconstitutionally deprived parents of the right to raise their children without unreasonable government interference. The Supreme Court's landmark decision against Pierce was the basis for future civil rights cases.

As governor, Pierce signed the second bill in the country allowing for the sterilization of the criminally insane. He also advocated lower property taxes, the institution of a state income tax, an alien land law (to prevent Asian immigrants from owning land), and the prohibition of religious clothing in public classrooms. Elected to Congress in 1932, Pierce supported public ownership of utilities, restriction of the Supreme Court's power to review economic legislation, and the legalization of birth control.

After retiring from politics in 1942, he wrote his memoirs, which covered some sixty years in public life, and managed his ranch in Umatilla County. Walter Pierce died in 1954 at age 92.