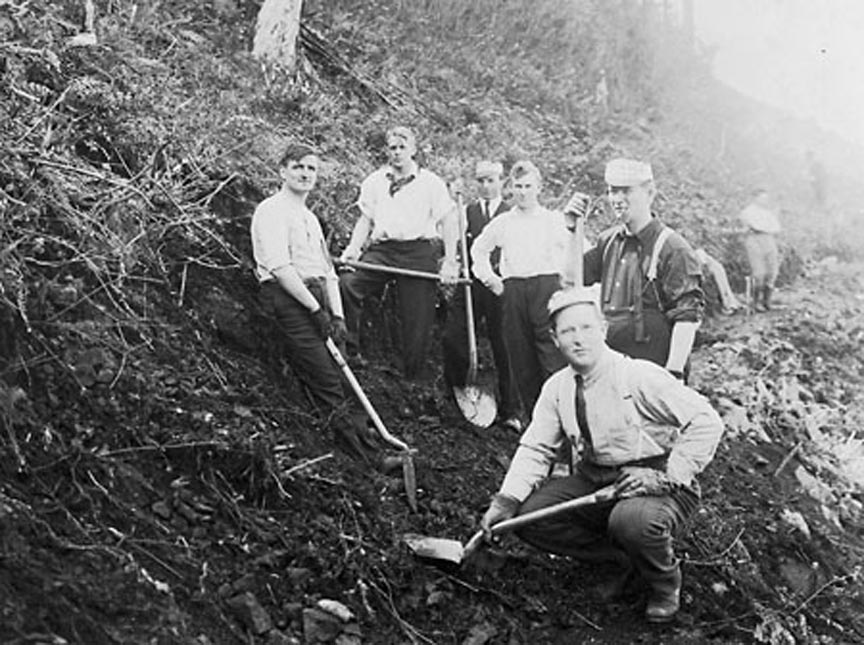 Will H. Daly was a central figure during the progressive era in Portland. Daly pursued the difficult goal of creating political space for unions and small business owners in an atmosphere dominated by corporate interests and wealthy elites.

Daly was born into a working-class family in Springfield, Missouri on May 25, 1869. He entered the printing trade at a very young age and was able to acquire an education by studying at night and on Sundays. Daly married Daisy Flannery in 1892 and eventually moved to Portland in 1903, after working several months in Salem. In Portland, Daly was employed by the Oregonian until 1907 when he gained employment at the Portland Linotype Company where he remained until 1911.

Daly soon became involved in the labor movement. In 1908 Daly was elected president of both the Portland printers’ local and the Oregon State Federation of Labor, to which he was elected for three additional consecutive terms. He was elected president of the Portland Central Labor Council in 1910 and became the first person to simultaneously hold both presidencies. As the leader of these labor organizations, he acted to unite the labor movement and sought to pass legislation favorable to employees.

Daly’s hard-line progressivism was highlighted in his introduction of “Big Bill” Haywood, a renowned socialist, at a labor parade in 1909. In response to the large socialist turnout for the event, Daly announced that “there was a growing conviction among the people that the old parties should be abandoned and that all should unite in a movement for real freedom in the United States.” Daly denounced the “great clamor from all quarters that the labor unions should be purged of the radical element: that they should be converted into admiration societies and pink tea socials; that they should abandon by a policy of indolence and passiveness the great objects for which they have striven for half a century.” Daly’s persistent support of labor soon afforded him a strong and loyal following among the working classes and eventually the small business owners.

Daly parleyed his support from these sectors into political success. In 1911, he successfully ran for city council and was appointed commissioner of public utilities. It was during this time that Daly began his own business, the Portland Monotype Company. As owner of a small business, Daly was now part of the employing middle class, but his zealous pursuit to represent the working classes in Oregon’s political sphere only increased as he adopted the cause of the small business owner, further bolstering his support base.

The alliance of labor and small business against large corporations came to a head most notably around the issue of jitneys in Portland. Jitneys were personal automobiles that were used as taxis. The streetcar interests monopolized the transportation business and sought legislation to make jitneys less profitable in order to continue to control the transportation market. As a small businessman himself, Daly understood the plight of the jitneys and gave the jitney owners a voice in city hall. Against allegations of “unfair competition” by the streetcar monopoly, Daly retorted saying “[i]t is said the jitney competition is unfair…where has there ever been competition that is fair? Competition means survival of the fittest; there is nothing fair about it.”

In 1917, Daly ran for mayor. Throughout the year, the conservative Oregonian ran a smear campaign against Daly labeling him a radical and a traitor during a time of world conflict and extreme nationalism. Daly weathered the attacks well until several days prior to the election when his house was broken into, his files gone through, and his application for membership in the Socialist Party stolen. The Oregonian published the document as proof of Daly’s socialism and disloyalty to his country. Without sufficient time to respond before the election, Daly lost by a margin of 2,000 votes, even though he had re-registered as a Republican in 1912. Nonetheless, the narrow margin that Daly lost by attests not only to Daly’s popularity, but also to the progressivism of the Portland community at the time.

Following the election, Daly's career in politics came to a halt. He was never able to rid himself of the stigma of radicalism. The historian Robert D. Johnston wrote, “[r]egardless of the direct role in the break-in, the Oregonian effectively stole the election and, in doing so, brought Daly’s political career to a close.” Retiring to the outskirts of Portland and spending most of his time in the maintenance of his business, Daly died on March 23, 1924.

A key figure in the history of the Oregon labor movement, Daly’s hard work and dedication to providing the working classes and small business owners of Portland and Oregon with a voice in politics greatly contributed to the organization and unification of workers of all trades. His progressive outlook on society, coupled with his unique pragmatism and leadership, allowed Daly to greatly advance the cause of labor in Oregon.