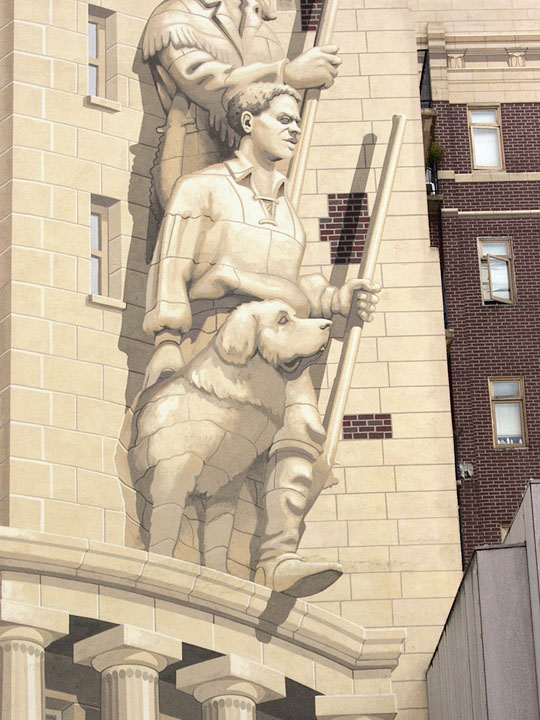 This image is a detail from Richard Haas's 1989 mural on the west side of downtown Portland's Sovereign Building, home of the Oregon Historical Society. It depicts York, the only African American member of the Lewis and Clark Expedition.

Little is known about York's early life. He was probably born in Virginia in the early 1770s, the son of Old York and Rose, both of whom were slaves owned by planter John Clark. The Clark family moved to Kentucky in 1784, taking with them twelve slaves, including young York. York was about the same age as the youngest Clark son, William, and was selected as his companion and later as his manservant. William inherited York when John Clark died in 1799.

Black studies scholar Darrell Millner argues that William Clark's 1803 decision to include York in the Corps of Discovery was not made lightly. He notes that many prospective candidates were rejected and that only “robust (Young Back Woodsmen of character) helthy hardy young men,” as Clark expressed it, were chosen for the Expedition.

York's contributions to the Expedition are noted throughout the Lewis and Clark journals. He helped prepare shelters, hunted game, portaged around rapids, scouted travel routes, carried meat back to camp, and otherwise participated in all of the other daily activities required of Corps members. York also made important contributions to the diplomatic efforts of the Corps. On a number of occasions Lewis and Clark refer to the Indians' fascination with York, the first person of African descent most of them had encountered.

Historians once believed Clark freed York shortly after the Expedition concluded in the fall of 1806, but documents discovered in 1988 tell another story. York was still enslaved in May 1809, when Clark wrote that he had given him a “severe trouncing” for his insolence and sulkiness, possibly stemming from York's forced separation from his wife the previous year. Clark had York incarcerated, then hired him out to a severe master in Kentucky. Clark did eventually free York sometime in the 1810s, after which the former slave almost completely disappears from the historical record. In 1832, Clark recalled that York had become a wagoneer and had died of cholera, but another tradition has York returning west to live with the Crow Indians, where he supposedly became a village headman, living well into old age.