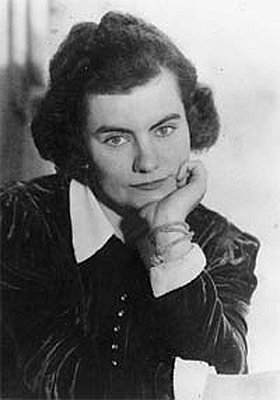 Julia Ruuttila was a journalist, author, and political activist whose career spanned six decades. She was married four times and took her last name from her Finnish third husband, Oscar, whom she married in 1951. Ruuttila wrote stories, articles, and poems under her maiden name, Julia Godman, pen names Kathleen Cronin and Kathleen Ruuttila, and using her married names Julia Bertram, Julia Eaton, and Julia Ruuttila. She had one child, Michael Jack, with her second husband Maurice “Butch” Bertram in 1928.

Ruuttila was born Julia Evelyn Godman in Eugene on April 26, 1907. Her father, John Godman, had been a member of the radical labor organization Industrial Workers of the World (IWW or “Wobblies”). Her mother Ella was a socialist and suffragist and had distributed birth control literature when such actions were illegal. Ruuttila herself was active in a variety of liberal and radical causes throughout her long career.

After witnessing in her childhood the poor working conditions in Oregon logging camps, Ruuttila helped her husband organize lumber mill workers into the International Woodworkers of America (IWA) union in 1935. That same year she headed the IWA’s Ladies Auxiliary to support striking timber industry workers. In 1936 she created a committee that worked for the release of Ray Becker, a Wobblies activist who had been convicted in the 1919 slaying of five men at a labor demonstration in Centralia, Washington. While Becker was never exonerated, his sentenced was commuted, and he was released from prison.

Beginning in the 1930s, Ruuttila wrote for a number of leftist and labor newspapers including the IWA's Timber Worker, the Communist Party's People’s World, the International Longshoremen's and Warehousemen's Union (ILWU) paper the Dispatcher, and the Federated Press news service. In the 1930s she also helped form the Congress of Industrial Organizations (CIO). Though she lobbied against U.S. participation in World War II, after the December 7, 1941 Japanese attack on Pearl Harbor, she supported the American war effort.

Ruuttila lost her position with the Oregon Public Welfare Commission for advocating on behalf of African American families who lost their homes as a result of the 1948 Vanport flood. In the 1950s, she was subpoenaed by the House Un-American Activities Committee (HUAC).

While living in Astoria between 1951 and 1965, she continued to work in journalism and also served with the Columbia River Fishermen’s Protective Union and founded the Clatsop County Committee for Protection of Foreign Born and an ILWU ladies’ auxiliary.

Upon moving back to Portland in 1965, she served as chair of the legislative committee of the ILWU’s Ladies’ Auxiliary and as a Democratic party precinct committee representative. Ruuttila also demonstrated against the war in Vietnam, agitated for a unilateral freeze on nuclear proliferation, opposed the storage of nerve gas in Oregon, and lobbied against state sales tax initiatives.

During her life she lived mostly in Portland, but she also lived in Astoria, California, Denver, and Chicago. At age 80 in 1987, Ruuttila retired to Anchorage, Alaska, to live with her grandson Shane and his family. She died in Anchorage in 1991.

Sandy Polishuk. Sticking to the Union: An Oral History of the Life and Times of Julia Ruuttila. New York, Palgrave Macmillan, 2003.

The most significant influence of World War I on the Pacific Northwest is reflected in the changing course of labor relations. Shortly after the United States joined the Allies—England, France, and Russia—in their struggle against the Central Powers—Germany, Austria-Hungary, and Turkey—Northwest loggers and mill workers began striking for better wages, …