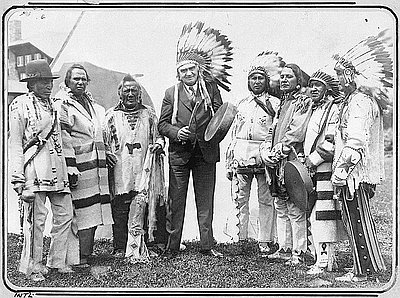 In a typically theatrical public relations event, Portland’s gregarious mayor George L. Baker posed for photographs following a Native American “adoption” ceremony.  Baker was elected mayor in 1917 and served for the next sixteen years.  It is no surprise that Baker enjoyed spectacles even as a civil servant, since he was a showman (though not himself an actor) for many years before running for mayor.

Baker, fondly known to Portlanders as “Our George,” was born in The Dalles, Oregon.  At nine he quit school to help support his family.  After moving around for several years, Baker settled in Portland.  He worked several years in Portland theater before acquiring the Third Street Theater in 1901 which he renamed the Baker Theater.  During those years, before becoming mayor, he served intermittent terms on the Portland city council.

Baker’s election, seven weeks after the declaration of World War I in 1917, placed him at the center of Portland’s wartime activity.  Baker was less concerned with German anti-American plots than he was with the radical labor leaders of the Industrial Workers of the World—IWW or “Wobblies”.  He was proud of raids he had carried out against the radical leaders, and was especially proud of the wartime recycling efforts at which Portland excelled.  Baker, a republican, ran for the nomination of U.S. Senator in 1924 but lost to Charles L. McNary.